Sturgeon Bay, Wisc — August5, 2019 — Sunshine and summertime was in full-swing for the 82 teams at Sturgeon Bay, WI August 2-3, presented by Mercury. Low winds and bluebird skies made fishing conditions comfortable, but fish-catching a bit more challenging.  For the champions, Matt Vanden Heuvel (Neenah, WI) and Chris Pockat (Gillett, WI), it was conditions their pre-fishing prepared them for.

When asked after their win on Saturday, what was the key to sealing the deal, Chris Pockat said “It was time on the water weeks ahead. We have been on this pattern for a while now and we knew it would hold if it was windy or calm.” Walleye fishing is generally thought to be better with a little “walleye chop” and though often that holds true on the Bay of Green Bay, the “Toughest Walleye Anglers on Planet Earth” often find a way to overcome the adversity of the weather.

“We pulled harnesses deep on structure” Matt mentioned after the event. “We stuck to this and didn’t know if it was going to be enough after yesterday” On day-one, Matt and Chris handed in a third-place basket weighing 32-15, nearly ten pounds behind the first day leaders of Nick Mills (Whitelaw, WI) and Trevor Gantz (Ashwaubenon, WI). Matt continued “We were thinking with the lack of wind today (Saturday) that the bite would be off for others.” 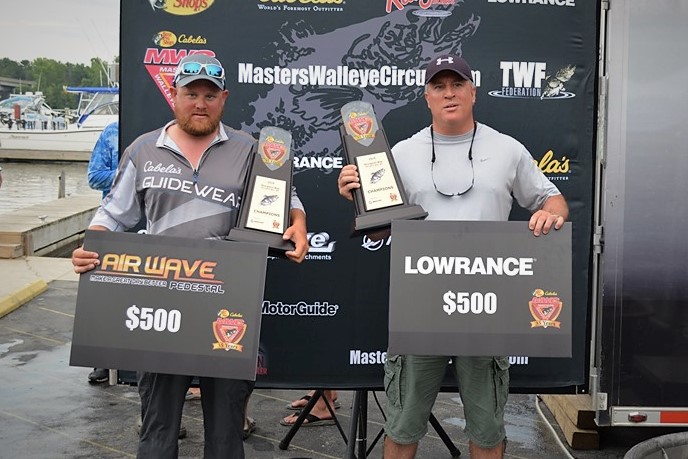 Matt and Chris knew winning in Sturgeon Bay would be a challenge, but their preparation for anything that may come their way set them up for a close, but accomplishing win. Matt quipped while holding the trophy that the next item he needed to be able to win again was the 2020 Ranger 622FS that was nearby. Ranger Boats along with Pamp’s Outboards (Green Bay) gave test rides in the much-hyped new multispecies boat during the weekend at the Lodge at Leathem Smith in Sturgeon Bay.

All together the Bass Pro Shops and Cabela’s Masters Walleye Circuit awarded $62,990.50 in cash and prizes in Port Clinton.