Wilson, Lakich secure “Team of the Year” with Win at Leech Lake Presented by Lowe Equipment

Walker, Minn. — September 23, 2019 — This season’s race for “Team of the Year” (TOY) saw 3 different lead changes and the final challenge came down to who would have the better weekend when the “Toughest Walleye Anglers on Planet Earth” took to the water on Minnesota’s Leech lake. Presented by Lowe Equipment, Chase on the Lake hosted the eighth stop of the Bass Pro Shops and Cabela’s Masters Walleye Circuit (MWC). 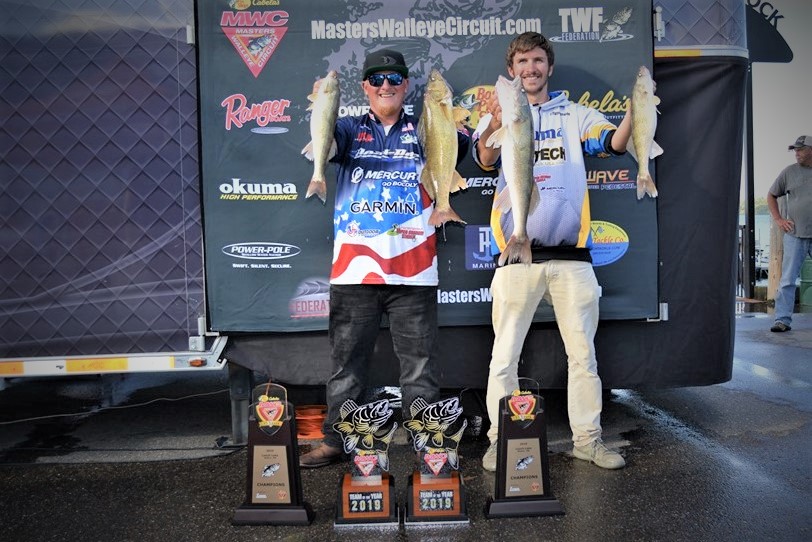 With a shot at TOY looming and the tournament lead after day one (21-04), the 2018 MWC Team of The Year, Max Wilson (Campbellsport, WI) and Isaac Lakich (Richfield, WI), set their eyes on something they hadn’t yet achieved, a Bass Pro Shops and Cabela’s MWC win. With a win, they would sweep the weekend, securing back-to-back TOY and reaching the top spot at the final event of the 2019 regular season.

“Isaac found something out there that has worked all week.” said Max on stage after weighing-in on day one. “He found this on Tuesday and if it goes tomorrow, I think we can win this.” Leech Lake has lots of different places to find large walleye, most anglers at the event will tell you the challenge was finding the 17-19” fish to go along with the 25-27” fish seemingly found easily.

On the second and final day, Wilson and Lakich, now with a target on their back, set out to secure the win and a second TOY award. They had to wait to weigh-in until the final moments of the event. Needing 16-03 to win, together Max and Isaac set their basket down on the scale. As the scaled locked, the 19-00, 5-fish limit set elation and emotion coursing through many who were there. None more than Max and Isaac. With total weekend weigh of 40-04, the duo were now champions.

“We just went out and fished.” Said Isaac as the crowd continued to clap” we knew that if we could repeat what we have been doing every day since Tuesday, this would work. We knew that if we didn’t worry about others, we just did what we had to do, this could happen” Isaac and Max used their electronics to target specific fish in the schools and cast directly to them to. “This is so special to us,” Max continued. “this year just felt different to us, you know? We really worked well together and stuck to what we knew.”

All together the Bass Pro Shops and Cabela’s Masters Walleye Circuit awarded $58,523.50 in cash and prizes in Leech Lake.