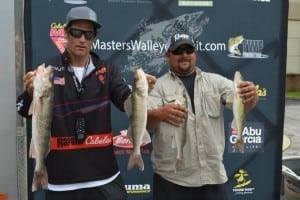 “It’s an amazing feeling,” Rieger, of Belle Vernon, said of his first MWC victory. The win was worth over $13,000 to the pair including, $7,400 in cash along with the $1,000 Ranger Cup contingency and $200 Okuma bonus. He and Papalia, of Warren, also pocketed $2,520 in cash from the option pot, and a $1,000 Cabela’s National Team Championship Prize Package, including paid entry into the 2016 NTC, travel stipend, team jerseys and plaques.

Because all 2015 Cabela’s MWC tournaments are designated as “State Championship Qualifying Events,” Rieger and Papalia also earned the title of Pennsylvania State Walleye Champions. Besides Keystone bragging rights, they claimed a $1,000 prize package including custom trophies, custom State Champions rings by Tight Lines Jewelry, a berth in the Cabela’s NTC, decals and a spot on the MWC website’s Wall of Fame.

Rieger and Papalia primarily pulled slow death-style nightcrawler rigs along the tops and edges of offshore humps in 10 to 23 feet of water on day one for a 7-pound, 1-ounce total. They added Berkley Flicker Shads to the program on day two and put 8 pounds, 5 ounces in the basket.

“This is the greatest thing ever,” grinned Papalia after the weigh-in. “It was a grind because inconsistent weather made the bite challenging, but all of our efforts paid off.”

Big-fish honors and the $200 Zippo Hot Hand Award went to Terry Zampogna and Toney Avenali for a 6-pound, 7-ounce walleye. In 7th place, Jesse and Dylan Nussbaum collected the $500 Lowrance Electronics contingency. In all, the Cabela’s MWC awarded a payback of $33,540 in cash and prizes.