Ponca City, Okla.—April 21, 2020 — The 2020 Bass Pro Shop’s and Cabela’s Masters Walleye Circuit (MWC) Schedule has once again been augmented due the Covid-19 pandemic plaguing the United States. The May 15-16 MWC event in Marinette WI, presented by Mercury, has been moved to the dates of August 7-8 to comply with rules currently in place. We look forward to getting back to fishing soon and businesses opening back up to get our economy going.

“It’s not ideal for anyone, but we need to make lemonade out of lemons.” Tournament Director Jack Baker said of the change. “Wisconsin Governor Tony Evers extend the stay-at-home- orders beyond the tournament dates and that isn’t going to allow for anglers traveling to find accommodations, food or other necessities to enjoy competing.” Baker also acknowledged the that ban on fishing Michigan waters in a motorized boat would have impeded many of the angler’s plans.

We want to thank the city of Marinette for their partnership through all of these changes and look forward to August when the circuit can at least operate within the parameters that Federal, State and Local health officials have in place at that time. 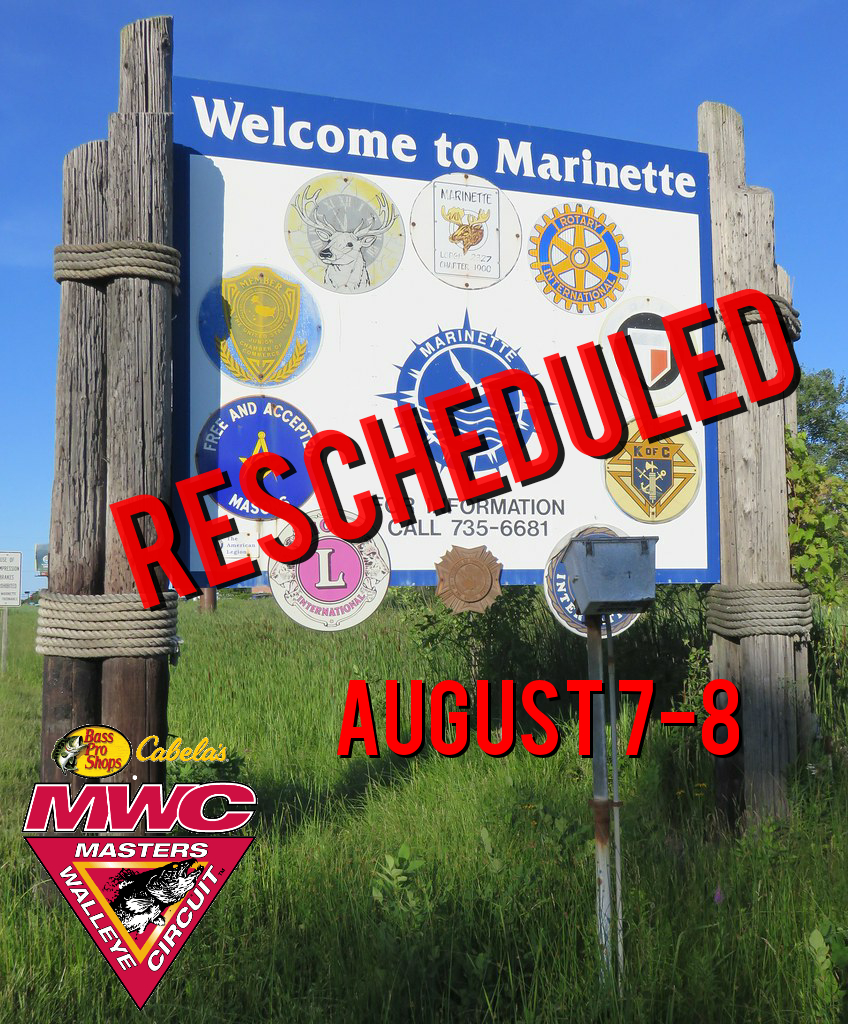 All registrations for the original May 15-16 event will automatically transfer to the new dates of August 7-8. If in the event a team cannot attend the new event dates, they may transfer the original entry to any other 2020 MWC qualifier event of their choice or request a refund.

Daily live weigh-ins at the Menekaunee Harbor are free and open to the public beginning at 3:00pm both days August 7, 8.  If you can’t make it in person you can watch the weigh-ins live, online, at masterswalleyecircuit.com or on our Facebook page.

For the area youth, immediately after the day-one weigh-in on Friday, we offer a Youth & Family Fishing Clinic in conjunction with the National Professional Anglers Association (NPAA). The first 50 youth will receive a free rod-and-reel combo!

Under the umbrella of The Walleye Federation (TWF), the Bass Pro Shops and Cabela’s Masters Walleye Circuit is North America’s longest-running and undisputed leader in team walleye tournaments and as an inductee into the freshwater fishing hall of fame, has set the standard for competitive walleye fishing for 36 years. MWC is open to walleye anglers from all walks of life. The 2020 schedule includes seven qualifiers in seven states, plus the 2021 Bass Pro Shops and Cabela’s MWC World Walleye Championship. Registration is now open for all events, and the registration deadline for the Marinette tournament is close of business Monday, August 3rd. Visit masterswalleyecircuit.com for full details.