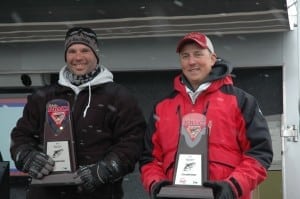 Spring Valley, Ill.—March 24, 2013—Iowans Clayton Freiburger and Mike Bisdorf rallied from third place on Day One to finish atop the 131 teams battling for their share of more than $70,000 in cash and prizes March 23-24 as the Cabela’s Masters Walleye Circuit kicked off its 29th season on the Illinois River at Spring Valley, Illinois.

“It’s surreal, it hasn’t sunk in yet,” beamed Bisdorf, of Dubuque, moments after he and Freiburger scored their first MWC victory. “This is our fourth season fishing the Circuit together—and our first win feels incredible!”

After weighing three fish totaling 7.02 pounds on their first trip to the stage during the two-day, two-person team event, they raised the bar with 11.13 pounds on Day Two. Anchored by a 3.10-pound sauger, which was big fish of the day, it turned out to be the heaviest basket of the tournament. 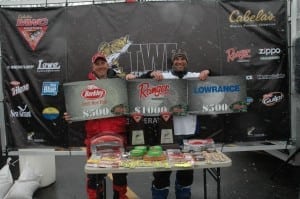 “It turned out to be a real nail-biter,” grinned Freiburger, also of Dubuque. He explained they targeted large female saugers holding in 16- to 18-foot depths on the river’s famed Clambeds. Jigs were their weapon of choice, with the most productive presentation being a 5/8-ounce leadhead tipped with a 3-inch Berkley PowerBait Ripple Shad and a minnow rigged piggyback-style.

A slow jigging hand was key, Freiburger noted, as fish were finicky in the 40-degree water. “It was a tough bite. We used a slow lift-hold-drop cadence, raising the jig a couple inches off bottom, holding it a second, then dropping it,” he explained. “You wouldn’t feel a strike, just weight on the line.” Ten-pound-test Berkley FireLine, tied direct to the jig, aided in detecting subtle takes.

Ryan Vecchia of Ladd, Illinois, and Bill Elliott, of Spring Valley, finished a close second with 18.01 pounds, worth $7,000 plus a $1,000 Cabela’s gift card from the Cabela’s Angler Cash Program. In all, the top 25 teams shared more than $70,000 in cash, sponsor bonuses and Big Fish Pot winnings.

Despite wintry weather and frigid water temperatures, the Illinois River yielded a total of 374 fish—mostly saugers with a few walleyes in the mix—weighing 667.07 pounds. Illinois Department of Natural Resources fishery staff were on hand to utilize the fish for the state’s stocking efforts before releasing the fish alive back into the Illinois River. To date, the Cabela’s MWC tournament has helped the DNR produce more than 100 million saugers for stocking in the Illinois River.