“This is a dream come true,” said Gary, the elder Zart. “Nicholas has been fishing with me since he was a baby, and we’ve been competing together on the MWC since 2008, when he was 12 years old. To win an event of this caliber with him, against the best of the best, is incredible.” 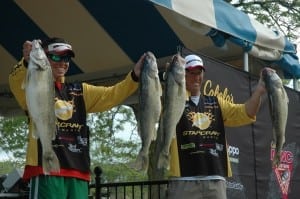 After their five-fish MWC limit weighing 43 pounds, 6 ounces landed them in second place on Day One, they added 41 pounds, 7 ounces to their tally on Day Two for an 84-pound, 13-ounce total weight. 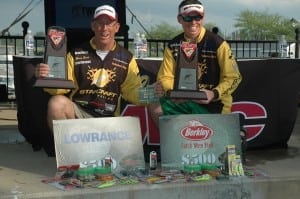 “It’s the most amazing feeling ever,” added Nicholas. He explained that their top tactic was pulling 6-inch Berkley Gulp! Nightcrawlers and live ’crawlers on spinner rigs .9 to 1.4 mph behind diving planers near bottom in 48 feet of water.

The Zarts, who operate Blue Dolphin Charters on Lake Erie, are no strangers to the fishery. But they credited their teammates Scott Geitgey, of Canton, Ohio, and Jason Kopf, of Avon Lake, Ohio, for pinpointing a school of migrating walleyes during prefishing, which was key to their victory.

David Kolb, of Rockford, Michigan, and Paul Rogers, of McHenry, Illinois, finished second with 83 pounds, 12 ounces, worth $5,500 plus a $1,000 Cabela’s gift card from the Cabela’s Angler Cash Program and $1,000 Ranger Cup contingency. In all, the top 20 percent of the field shared more than $44,000 in cash, sponsor bonuses and Big Fish Pot winnings.

A total of 615 walleyes weighing 3,794 pounds, 8 ounces crossed the stage during the tournament. Big fish was a 12-pound, 7-ounce beauty caught by the Michigan team of Mark Lemke, of Dexter, and Walter Price, of Lowell.

Ohioans Mark Brumbaugh, of Arcanum, and Michael Robertson, of Laura, had big basket of the tournament with 52 pounds, 11 ounces. In doing so, they broke the Circuit’s all-time single-day weight record of 49 pounds, 10 ounces, set by Iowans Marty Stuefen and Carl Holten, both of Harpers Ferry, at the 2013 Detroit River and Western Lake Erie qualifier. 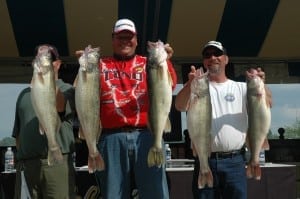 The team-format tournament offered two days of competition on Erie’s legendary walleye fishery, with one day reserved in case of bad weather. Teams fished from 7 a.m. to 4 p.m. on Friday, then waited on shore Saturday, after fishing was cancelled due to a small-craft advisory. The tournament resumed on Sunday. Each day, teams were allowed to bring their best five walleyes to the scale each day.

Weigh-ins were held at the Huron Boat Basin. The Cabela’s MWC, National Professional Anglers Association, Pure Fishing and Zippo Outdoor Brands presented a Youth & Family Fishing Clinic immediately after the first day’s weigh-in. The first 50 youths received rod-and-reel combos courtesy of the NPAA. Fans also gathered at the boat basin to see the anglers off prior to each morning’s takeoff.