Presented by The Walleye Federation 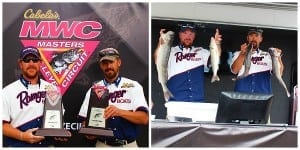 “The entire tournament was an awesome experience,” Schoning, of Colorado Springs, said of competing in he and Kiefer’s first-ever Cabela’s MWC event. “Ending up on top was just a plus.”

After their five-fish MWC limit weighing 11 pounds, 13 ounces landed them in second place on Day One, they tapped a big-fish location to add a whopping 18 pounds, 12 ounces to their tally on Day Two for a 30-pound, 9-ounce total weight.

“It was a lot of fun,” added Kiefer, of Brighton. He explained that their top tactic was pulling 6-inch Berkley Gulp! Crawlers and nightcrawlers on size 2 to 4 octopus-style hooks .7 to .9 mph behind a ¼-ounce bottom bouncer. He noted that when the team trolled through flooded timber, the Gulp! artificial baits clung to the hook much better than live ’crawlers, and accounted for a number of their fish. “A 6-foot leader of 6-pound Berkley Fluorocarbon was also key, because the fish were a little spooky,” he added.

Bill Ianiro of Castle Pines, Colorado, and Richard Stebbins, Jr. of Arvada, Colorado, finished second with 23 pounds, 1 ounce, worth $3,100 plus the $500 Lowrance Electronics award for being the highest-finishing team using a Lowrance HDS Gen2, HDS Gen2 Touch or Elite-7 unit.

In all, the top 20 percent of the field shared more than $13,900 in cash, plus sponsor bonuses and Big Fish Pot winnings.

A total of 198 walleyes weighing 414 pounds, 13 ounces crossed the stage and were quickly returned to the lake in the catch-and-release format. Big Fish was a 7-pound, 9-ounce beauty caught by Schoning and Kiefer, whose 18-pound, 12-ounce Day Two sack was big basket of the tournament.

Teams fished from 7 a.m. to 3 p.m. on Friday and Saturday (Sunday was reserved in case foul weather caused a cancellation on either of the first two days), and were allowed to bring their best five walleyes to the scale each day. Weigh-ins, which began at 3 p.m. daily, were held at scenic Lake Pueblo State Park just outside Pueblo, Colorado.

Adding to the excitement, the Cabela’s MWC event was held in conjunction with a Colorado Walleye Association (CWA) tournament, allowing anglers to fish one or both of the events simultaneously. The CWA also supplied volunteers to assist with tournament operations. Plus, on Saturday, the MWC stage also hosted the Student Angler Federation’s Colorado and New Mexico State High School Fishing Championship, immediately before the MWC and CWA weigh-ins began.