“It’s a nice feeling to win this one,” said Hughes, of Oshkosh, Wisconsin. An MWC competitor since 1990, he was quick to note the unique camaraderie enjoyed on the Circuit. “It’s really special fishing with all the local teams—who’ve been so supportive and gracious to us—along with all the MWC traveling teams, too. It feels like a fraternity of brothers.”

After a stellar opening day performance, highlighted by their five-fish MWC limit weighing 23 pounds, 13 ounces, the team owned the leaderboard on Day One and never looked back. Though their second trip across the Cabela’s MWC stage featured a bit smaller bag—five walleyes weighing 16 pounds, 9 ounces—they still topped the nearest competitors in the 118-team field by more than five pounds. 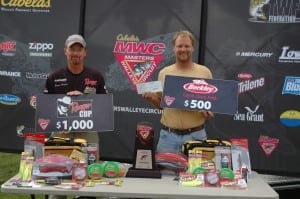 The Winnebago win earned them the $16,200 first-place purse, which included $15,200 in cash plus a $1,000 Cabela’s National Team Championship Prize Package featuring a paid NTC entry, travel stipend, team jerseys and plaques. Plus, they earned the $1,000 Ranger Cup contingency, a $500 Berkley Tackle Package, and $980 from the Big Fish Pot for total winnings of $18,680 in cash and prizes.

“It’s great to win, but it doesn’t seem real yet,” added Jacobson. The Weyauwega, Wisconsin, competitor has quite a track record on the lake. In fact, this was his second MWC victory on Winnebago. “Partner Greg Krings and I won the MWC tournament here in 1984,” he grinned, noting that he and current partner Jim Hughes scored a win at the Mercury Nationals on Winnebago in 2009.

While changing weather patterns forced Hughes and Jacobson to hunt for fish, their main tactics hinged on crankbaits including the Berkley Flicker Shad. Trolling 10- to 14-foot depths near the mouth of the Fox River produced most of their fish, although Jacobson noted that they only got five bites each day. “If something had gone wrong with one or two of those fish, it would have been a whole different story for us,” he said.

The team-format tournament offered two days of competition on the Winnebago Chain’s world-class walleye fishery, with one day reserved in case of bad weather. Each day, teams were allowed to bring their best five walleyes to the scale. A total of 568 walleyes weighing 1,659 pounds, 12 ounces crossed the stage during the tournament. Of those, 564 were returned to Lake Winnebago under the Cabela’s MWC’s time-tested catch-and-release format. Big fish was a 6-pound, 9-ounce walleye caught by the Wisconsin team of Pete Petta, of Tomahawk, and David Cooper, of Schofield. The fish was worth $1,225 from the Big Fish Pot.

FOR over 800 Pictures of the event…CLICK HERE