2023 Schedule Released to Industry at ICAST

Oconto, WI – October 2, 2022 – For Steve Vandemark (Linwood, MI) and Jerry Fox JR (Harrison Charter Township, MI), the trip to the Bay of Green Bay for the 2022 Bass Pro Shops and Cabela’s Masters Walleye Circuit (MWC) World Walleye Championship (WWC) proved to be well worth the long drive around Lake Michigan to get there. The duo is no stranger to big water and the great lakes with having the waters of Lake Huron, Lake St. Clair and Lake Erie just a short trip down the road from them. Their big water experience is what helped prepare them to win against the top 38 qualified teams representing the best teams in the competitive walleye fishing world. 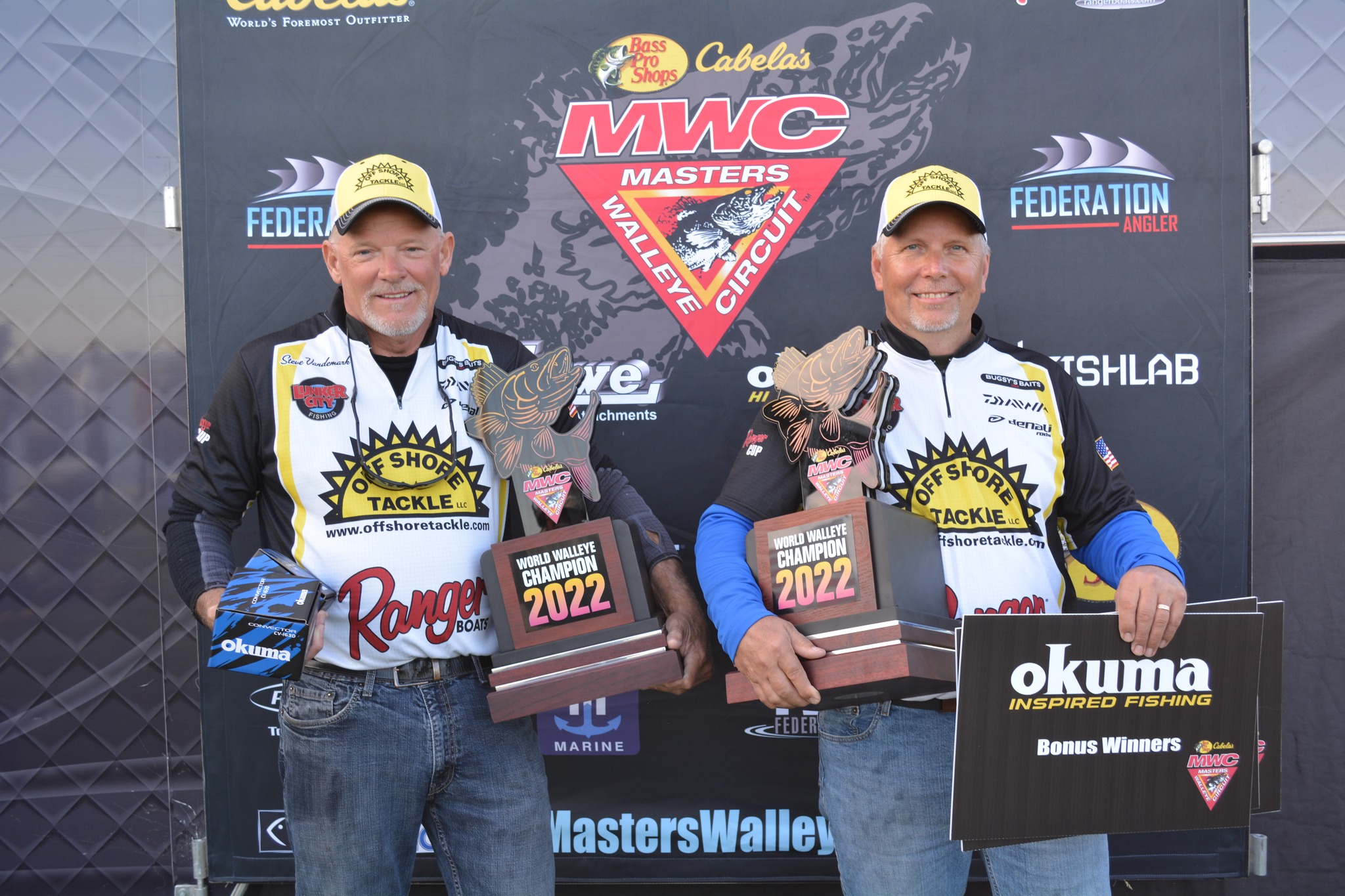 The weather leading up to this championship event proved to be challenging for anglers to get out and scout and practice. High winds and multiple cold fronts leading up to the WWC scattered the fish and really made these anglers live up to the title of being the “Toughest Anglers on Planet Earth”. For Steve and Jerry, it was a matter of utilizing their electronics and covering water. And cover water they did! The team worked out a program of trolling crank baits with snap weights on deep rock structures nearly 40 miles from the launch location in Oconto, all the way on the north-east side on the bay!

With a day-one weight of 23-11 lbs., Steve and Jerry had nearly a 4.5 lb. lead over the second-place solo angler, Dan Stier (Mina, SD), who had a day-one total of 19-05 lbs. But after day one, it was evident that the rest of the field was able to start patterning these post cold front walleyes and start figuring out patterns of their own, as witnessed on day-two as more 5 fish limits and larger weights came across the scales. Steve and Jerry’s program stayed true for them through the second day of the event as they maintained their lead by nearly 5 lbs. over the day-two second place team of Randy and RJ Harwood (Oshkosh, WI) going into the third and final day of the WWC.

On the third day of the tournament, and after two days of stable weather, the field of 38 teams took off for their final shot at bringing home that coveted 1st place trophy. Anticipation was growing around the city of Oconto, WI on who was going to be crowned the World Walleye Champions. By noon on the final day, spectators and families of the anglers started showing up to get the best view of the anglers as they came in with their final day’s catch to bring across the stage. Everyone was excited to see if the team from Michigan could hold on to their lead for the win or if there was going to be a come from behind team that would find some of those giant walleyes that the Bay of Green Bay is known for.

As teams started to bring their final day’s catch to the bump master for inspection it was pretty evident that the fishing was better than the previous two days. The fish looked bigger and there were even more 5-fish limits than the previous day. Sammy Cappeli (Poland, OH) and Anthony Naples (Salem, OH) brought in the largest bag seen during this event, a huge 29-01 lbs. sack that boosted them from the lower half of the field into 7th place by the end of the tournament. Multiple low 20 lb. bags moved the field around and made for an intense weigh-in. Towards the middle of the weigh-in, the eventual winning team brought their fish across the stage and set their 16-01 lbs. basket of walleyes on the scale and with that, solidified their lead to go on and win with a 3-day total of 59-12 lbs. on the biggest stage in team walleye fishing in the world, and be crowned the champions of the World Walleye Championship.

The payout for the World Walleye Championship is designed to pay out to all qualified teams that fish in all qualifying days of the event. The total payout in cash and prizes totaled $132,868.63 with the first-place team from Michigan, Steve and Jerry walking away with nearly $30,000 in cash and prizes, including $21,000 in cash, $7,000 Ranger Cup Bonus, $1,000 Lowrance Bonus, (2) Okuma Reels, Championship rings, and World Walleye Championship trophies. The top 10 teams in the team of the year standings split $22,521. Overall, the MWC paid back over 141% on entry fees on the full season and nearly 460% on entry fees for the championship! 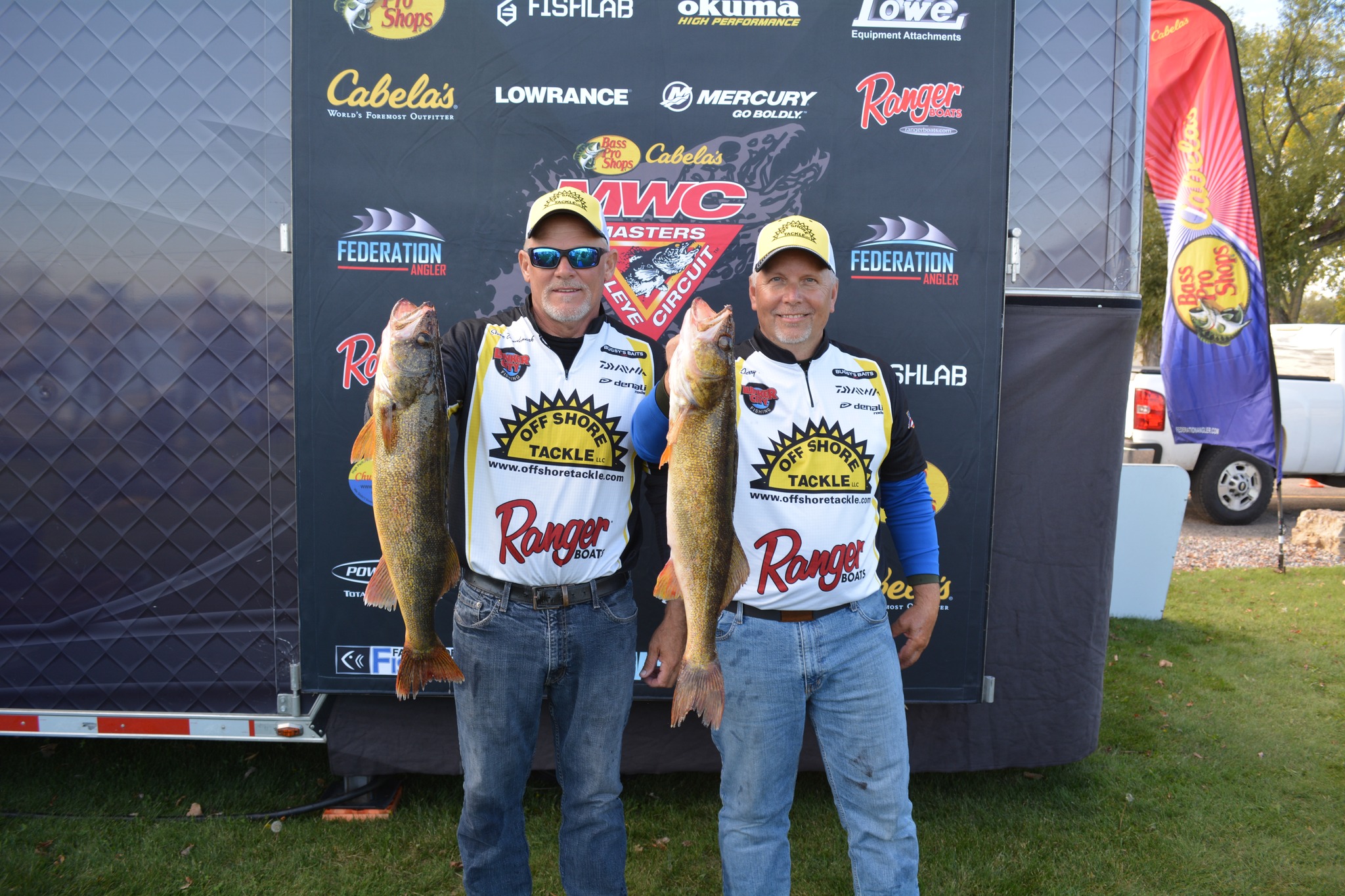 Second and third place walked away with a hefty load of cash and prizes as well. Dan Stier and Curtis Olivier, with a total weight of 58-04 lbs. good for second place, won over $10,000 which included a brand new Lowrance 7 Live. The third-place team Mike Dorris and Douglas McDonough, with a total weight of 55-15 lbs., took home a check worth $5,000.

The anglers in Oconto, WI caught a total of 336 walleyes weighing a total 1188-01 lbs. during the event. The big fish of the event was caught on day-two of the tournament by Kaiden Dorris and Mark Schoning and weighed 9-12 lbs.

Under the umbrella of The Walleye Federation (TWF), the Bass Pro Shops and Cabela’s Masters Walleye Circuit is North America’s longest-running and undisputed leader in team walleye tournaments and as an inductee into the Freshwater Fishing Hall of Fame, has set the standard for competitive walleye fishing for 38 years. The MWC is open to walleye anglers from all walks of life. The 2023 schedule includes seven qualifiers in six states, plus the 2023 Bass Pro Shops and Cabela’s MWC World Walleye Championship in South Dakota on Lake Sharpe. Visit masterswalleyecircuit.com for full details.