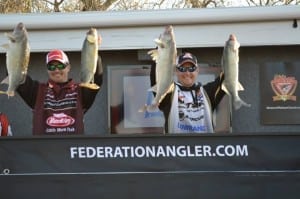 “It feels great,” said Sprengel, of Beaver Dam. “I didn’t know what to expect coming here. We just tried to cover as much water as possible and got some decent fish in practice, but nothing like we caught during the tournament.”

The Championship pitted 38 elite two-person teams against one another for lucrative payouts and ultimate bragging rights in the walleye world. Teams had qualified for the no-entry-fee event by earning points while competing on the 2013 Cabela’s MWC trail, which visited 10 world-class destinations from Colorado’s Pueblo Reservoir to Lake Erie out of Huron, Ohio. 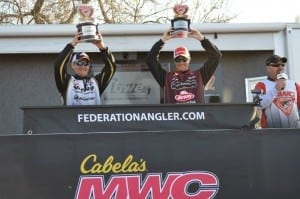 Sprengel and Navis, of Brandon, rose through the ranks with progressively bigger baskets, notching 5-fish limits weighing 23-13, 29-06 and 32-10 for an impressive 85-13 total. It was the team’s second championship win, having earned top honors at the prestigious 2011 Cabela’s National Team Championship on Bays de Noc out of Escanaba, Michigan. They also won the title of Cabela’s MWC Team of the Year in the 2013 season.

“It’s very special to come into a new body of water like Devils Lake and figure it out, especially against all the great sticks in the Championship field,” said Navis. He and Sprengel collected a total of $24,000 in cash tied to their first place finish, along with the $1,000 Ranger Cup contingency, $500 Berkley Baits prize package and $500 Lowrance HDS Gen2 Touch and Elite 7 bonus. They also claimed the Rockstar Comeback Award, worth a two (2) $500 Rockstar Mud Flap Packages. 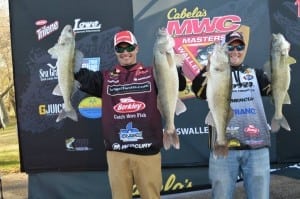 The champions targeted rocky riprap and boulders along flooded roadways lying in 18 to 27 feet of water in the Pelican Lake area. They trolled size 7 Berkley Flicker Shads 1.5 to 1.8 mph, using leadcore mainline tipped with a 15-foot leader of 20-pound-test Berkley FireLine. “Banging bottom was key to getting bit, and the FireLine leader was critical to reducing the number of crankbaits we lost to snags,” said Sprengel.

In second, Don Denning and Chad Maloy, both of Fargo, North Dakota, pocketed $10,000 for their 82-03 total, after finishing strong with a monstrous final catch of 36-12 that was big basket of day three. 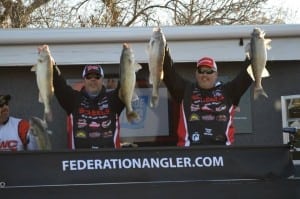 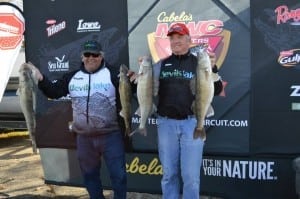 Spencer and Ron Deutz won the $200 Optima True Blue contingency. In all, more than $126,000 in cash and prizes were awarded through the World Championship payout and Team of the Year race.

A total of 490 walleyes weighing 1,876 pounds, 8 ounces crossed the scale during the three-day tournament. Walleye fans of all ages watched the drama unfold at the weigh-ins, which were held daily at Grahams Island State Park. 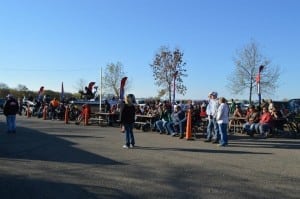 Adding to the excitement, on-the-water and weigh-in action was filmed for national television airing on Federation AnglerTV, on NBC Sports and the Pursuit Channel.

The first airing is set for December 1st at 1:30pm CST on NBC Sports. Check federationangler.com for additional dates and airtimes.

Under the umbrella of The Walleye Federation (TWF), the Cabela’s MWC is open to avid walleye anglers from all walks of life. The 2014 trail included 10 qualifiers spread across seven states. Teams showcased their skills—and sponsor products—at venues such as the Illinois, Detroit and Mississippi rivers, Green Bay, Big Stone Lake, Kinzua Reservoir and Lake Erie.

For live video check out the home page