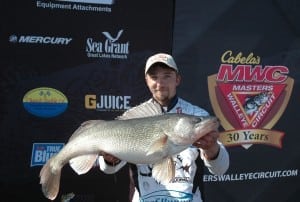 Announced today, the MWC’s 31st season will feature premier destinations including a mix of traditional favorites and exciting new fisheries, all hand-picked by the anglers themselves. Leaning heavily on the results of last season’s midyear angler survey, the Circuit expanded the trail to 12 events, including 11 regular-season tournaments plus the 2015 World Walleye Championship—which had already been announced for Huron Ohio, October 21-24, 2015.

The 2015 season will also offer two-person teams a variety of new features, programs and contests, along with several rule changes suggested by MWC anglers that will be announced in the coming weeks. As has been the case the past two years, payback will top 100 percent in cash and prizes, just as it did in 2014, which rewarded MWC anglers with a total payback of more than 127% percent!

In all, nine different states will host 2015 MWC events, complete with all-new State Champion’s titles as well as an end-of-the-season Wildcard Event. Details on these new opportunities and awards will be announced shortly. In addition, a minimum of four MWC events will be filmed for national television—which means recognition and exposure for all MWC anglers and sponsors has never been better.

“Our 2015 MWC schedule and programing has something for everyone,” said MWC Senior Tournament Director Dan Palmer. “We want to provide an affordable opportunity for all walleye anglers to compete, provide them all with the recognition they deserve, and allow them to have a great time while they’re at it.”

Palmer noted that the schedule is set in “wet cement,” meaning the Circuit does not anticipate any changes—but unforeseen amendments are possible. “We want to let all of our anglers know that due to the size and scope of the MWC as a national organization, some states we are visiting will not issue permits for 2015 yet—and some not until after the first of the year—so our schedule is always tentative based on those permit approvals,” he explained. “Occasionally, we are forced to move an event due to those issues, but we wanted to get the schedule out as soon as it was possible based on the best information available to us, so that our TWF clubs and MWC anglers nationwide can plan their seasons accordingly.”

The 2015 Cabela’s Masters Walleye Circuit schedule is as follows:

Under the umbrella of The Walleye Federation (TWF), the Cabela’s MWC is open to avid walleye anglers from all walks of life. Registration for all events opens January 2, 2015. For more information, check back often at www.masterswalleyecircuit.com as season info is regularly updated.