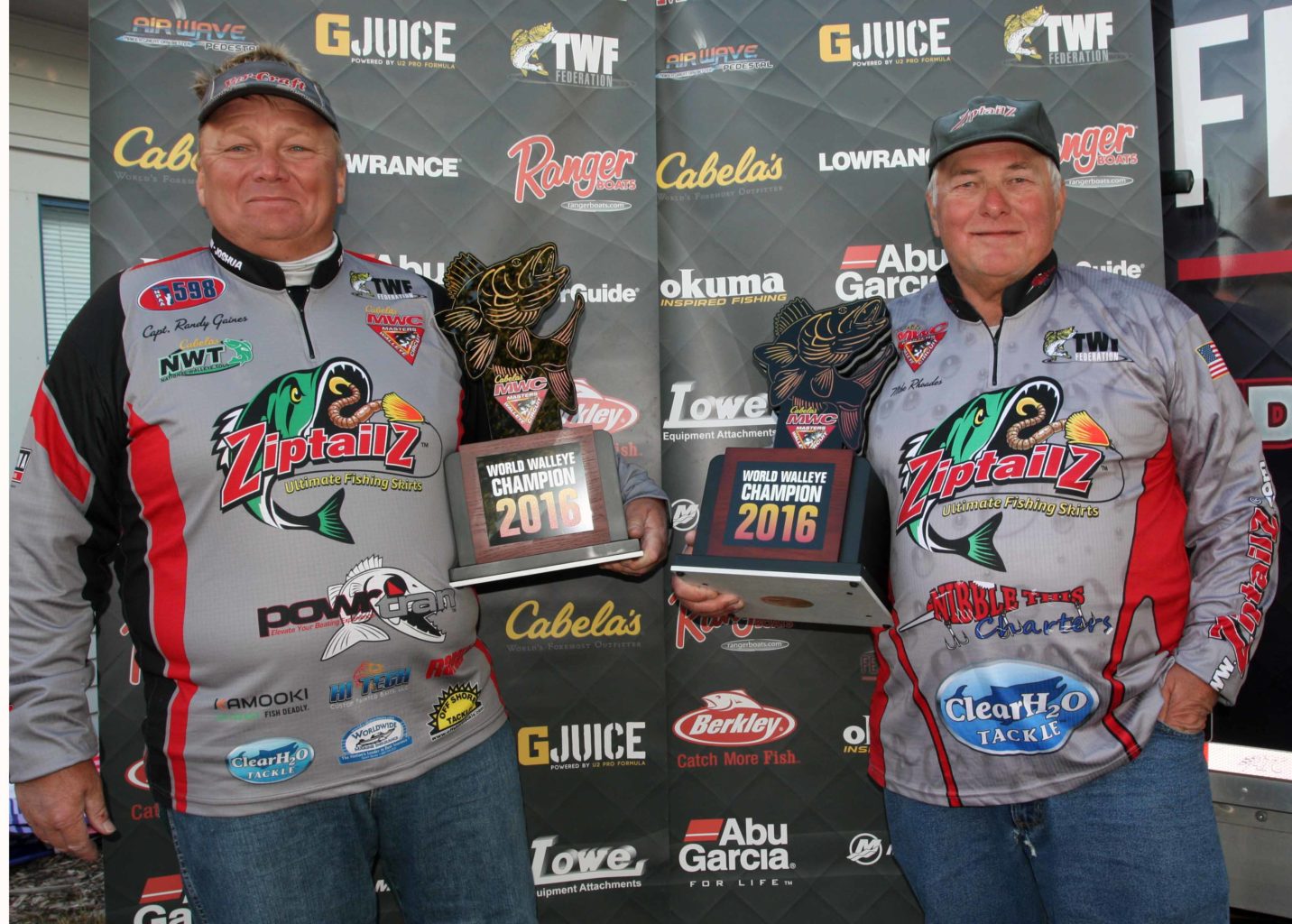 Presented by title sponsor Cabela’s, the prestigious event saw the top qualifiers from the circuit’s 2015 season battle for their share of more than $100,000 in cash and prizes on Wisconsin waters of Green Bay and the Fox River out of Green Bay’s Metro Park.

“This is one of those pinnacle events that you always dream of winning,” said Gaines, of Salem, Ohio. “It’s good closure for a great year and will light the fire all winter long to get after it again next spring. I’m just so excited.”

“It’s a little unbelievable but I’m very happy,” added Rhoades, of South Bend, Indiana. “Earlier in the week, I wouldn’t have believed this was going to happen.”

Indeed, they endured a challenging practice period that started out tough. “We didn’t catch a fish our first day here,” Gaines noted. “But we just kept working, trying different things and fortunately peaked at the time of competition, so it turned out to be the perfect storm for us.”

On Green Bay, the five-year circuit veterans made a 40-mile run to an area near Sturgeon Bay where they vertically fished swimming jigs weighing up to 1¼ ounces on bottom at the base of a sharp drop-off in 60 to 70 feet of water.

When the field was restricted to the Fox River on day two due to gale force winds, they trolled Berkley Flicker Shads and Flicker Minnows behind planer boards.

Gaines and Rhoades collected a cool $15,000 in cash for their efforts, along with custom trophies and championship rings. 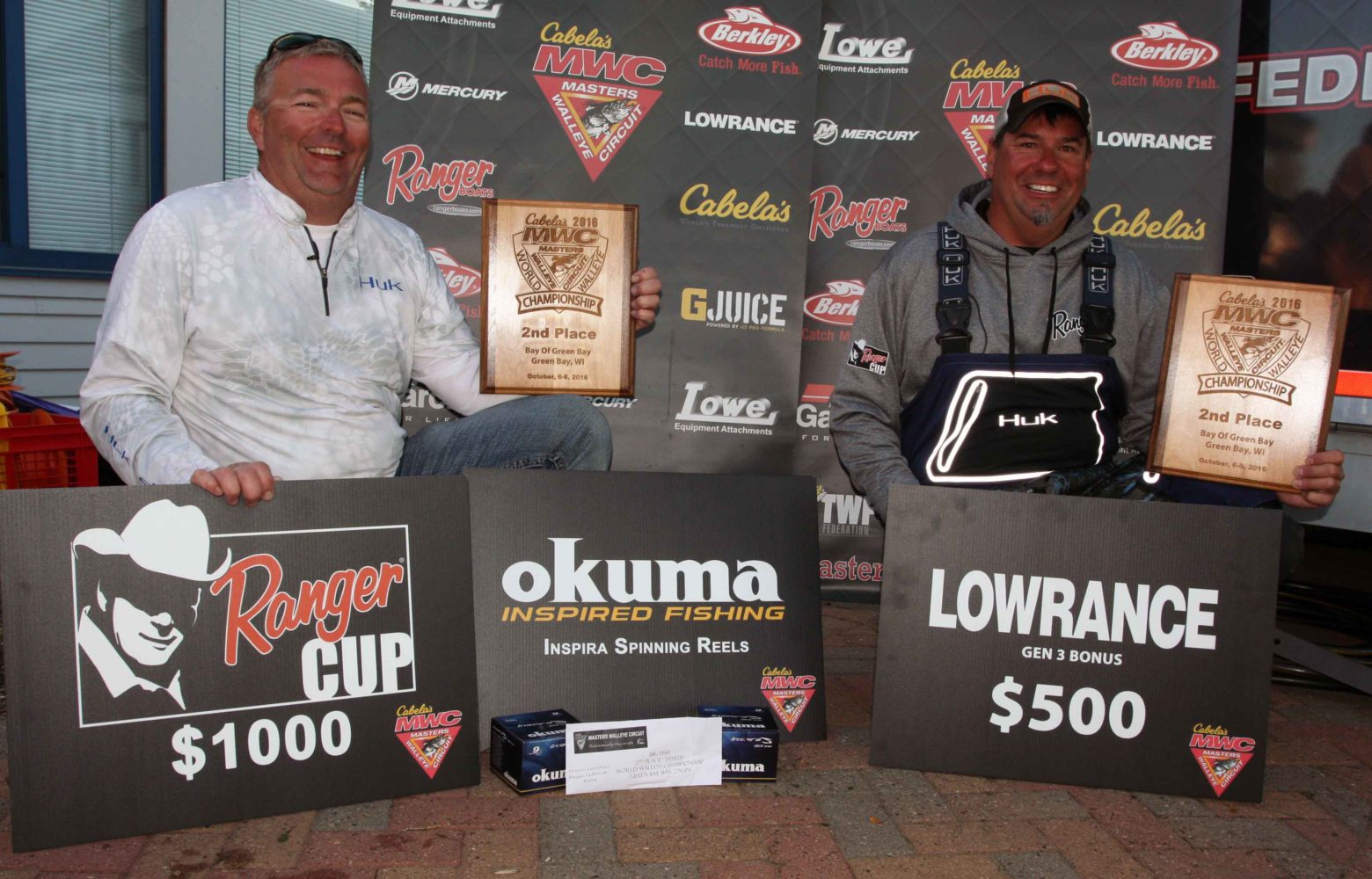 Wisconsin’s Michael Lenarduzzi and Douglas McDonough pushed the leaders throughout the tournament, holding second place with 26-07, 7-08 and 13-08 catches for 47 pounds, 7 ounces. They pocketed $9,255 including the $7,000 second-place cash payout, plus the $1,000 Ranger Cup contingency, $500 Lowrance Electronics bonus, $200 Okuma Reels award and $550 cash for second place in the MWC Big Fish Pot.

In all, the Cabela’s MWC awarded more than $147,000 in end of the season cash and prizes, including Team of the Year and Championship payouts. The circuit provided a 174 percent Championship payback and 137.5 percent overall payback on entry fees for the season.

A total of 545 walleyes weighing 1,274 pounds, 2 ounces crossed the scale during the three-day tournament in the Cabela’s MWC’s catch-and-release format. South Dakota’s Brian Steichen and Shawn Carl earned $925 cash plus the $200 Abu Garcia bonus for catching big fish of the event, an 8-pound, 10-ounce trophy.

Great crowds gathered riverside to watch the action at Green Bay Metro Park. To the delight of young walleye fans and their families, the Cabela’s MWC, National Professional Anglers Association and Pure Fishing presented a Youth & Family Fishing Clinic immediately after Friday’s weigh-in. Youngsters got to meet MWC anglers, learn about fishing and conservation, and received a free rod-and-reel combo courtesy of the NPAA.

Adding to the excitement, the event was being filmed for national television airing on Federation Angler TV, which appears on the Pursuit Channel.

To view image galleries from the each of the three days, along with team photos from the rules meeting and a special ceremony at the Green Bay Cabela’s commemorating the Cabela’s MWC’s induction into the National Fresh Water Fishing Hall of Fame ceremony on Oct. 5,