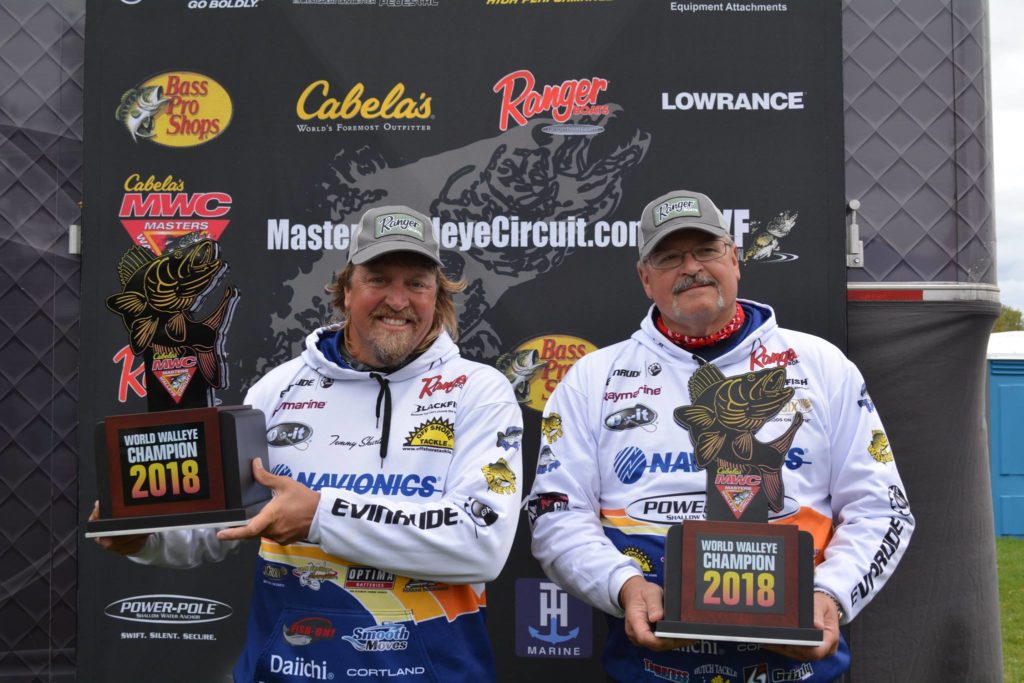 In doing so they have secured their position as some of the world’s most elite walleye anglers by placing their names in the walleye records books as the only team of win back to back World Walleye Championships in the last 25 years. Not since walleye legends Gary Gray and Bill Klotzbuecher accomplished that feat back in the 92 and 93 seasons has anyone been able to retain their crowns as MWC World Walleye Champions in back to back years.

Skarlis and Lahr won the 2017 MWC World Walleye Championship on Minnesota’s Cass Lake Chain, then started the 2018 year off with a win for their team at the MWC season opener at Spring Valley and closed it out with their second world title at Escanaba last weekend.

“The feeling is surreal,” said Skarlis, of Denver. “We are so blessed. I’ve fished the MWC for almost 30 years and this is where you hone your skills and make the best friends of your life. Winning a second MWC World Walleye Championship is going to take a while to sink in.”

“It’s pretty amazing,” added Lahr, of Dubuque. “I’m blessed to have such an awesome partner. Once he finds the fish he will figure out a way to catch them.”

Lahr and Skarlis brought a 14-pound, 3-ounce, 5-fish limit to the scale on day one. They followed up with a 17-pound, 4-ounce limit on day two and 23-pound, 7-ounce limit on day three for a 54-pound, 14-ounce total weight that lifted them 4 ounces over their nearest rivals. 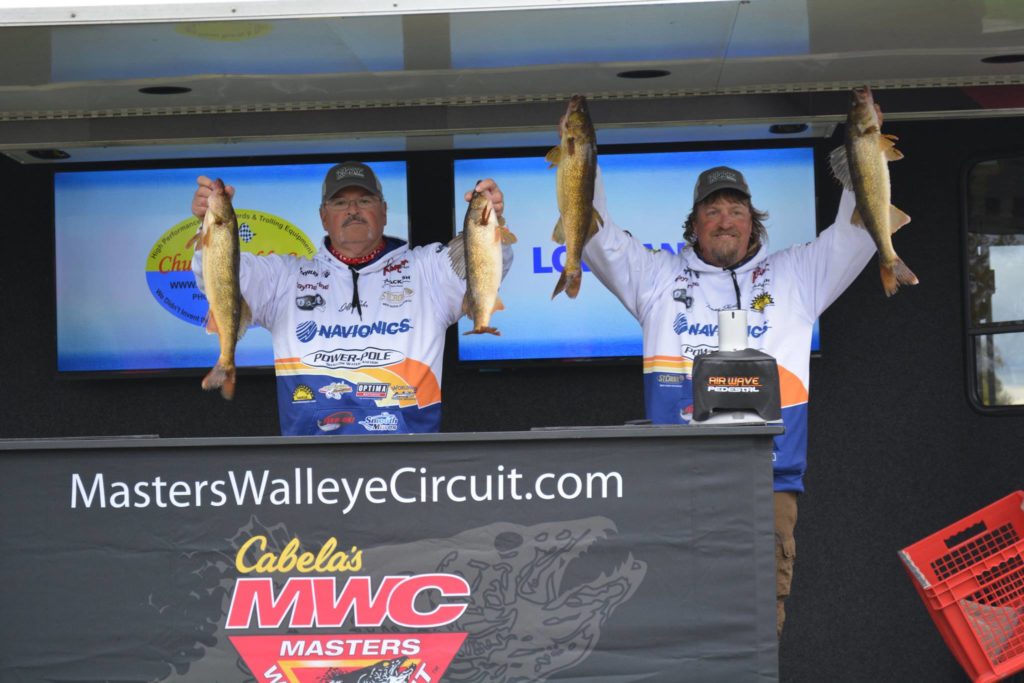 They boated their winning walleyes by vertical jigging and casting in depths ranging from 18 down to 50 feet. “Most of the big fish came in 22 feet of water,” Skarlis said, noting the team’s mapping software was key in positioning their boat in the perfect spot to execute their presentations.

Presented by Cabela’s and hosted by the Bays de Noc Convention and Visitors Bureau, the three-day event featured the top 32 teams from the 2017 MWC season, which spanned five states and included seven qualifiers on world-class walleye waters including the Illinois, Detroit and St. Marys rivers, Green Bay, Big Stone Lake, Lake Winnebago and Devils Lake. Championship anglers were battling for a share of more than $103,000 in cash and prizes. 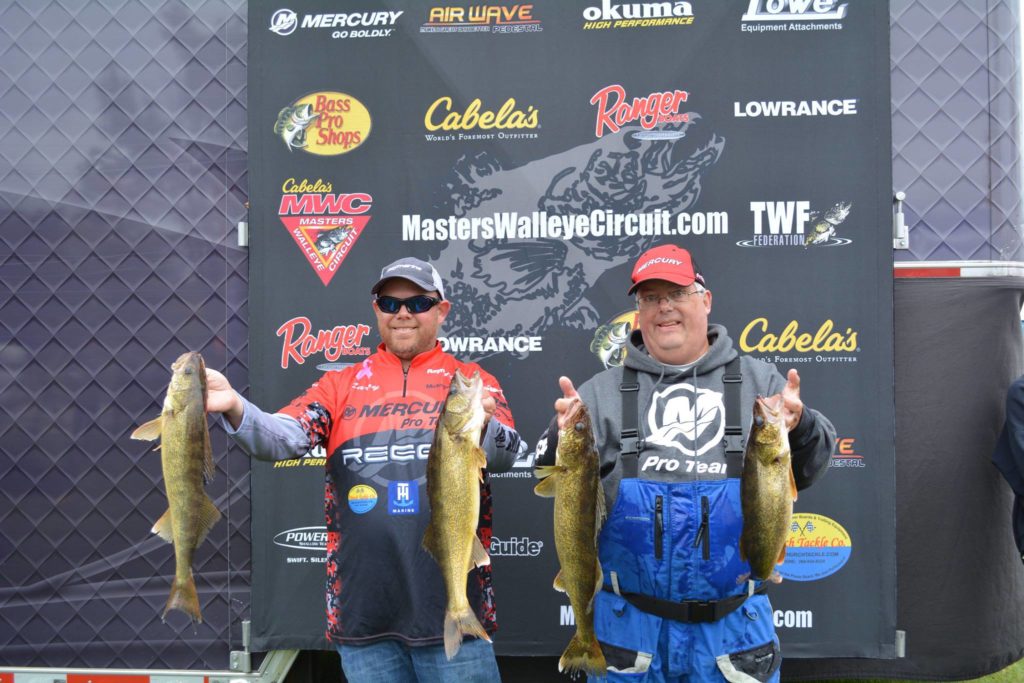 A total of 241 walleyes weighing 830 pounds, 12 ounces were brought to the scale during the championship and returned to Bays de Noc in the Circuit’s time-tested and research-proven catch-and-release format.

Escanaba Harbor hosted takeoffs and weigh-ins, which drew enthusiastic crowds to cheer on the MWC anglers. The action was also broadcast live online via streaming video coverage and an updated leaderboard, both at masterswalleyecircuit.com. On-the-water and weigh-in footage was also filmed for national television airing on Federation Angler TV. For details and episode schedules, visit federationangler.com.

The MWC World Walleye Championship is the only national walleye event that you must qualify to get into, you must perform or you don’t get in only the best of the best are invited.  For Skarlis and Lahr, they have already qualified for the 2019 World Championship next on Lake Winnebago in Oct 2019 which means they have the once in a lifetime shot at making it three in a row, a feat that has never been accomplished by anyone, anywhere in any major competitive fishing event of any kind, if they can pull off another World Walleye Championship win in 2019.

North America’s longest-running and undisputed leader in team walleye tournaments, the Cabela’s MWC has set the standard for competitive walleye fishing since 1984. Operated under the umbrella of The Walleye Federation (TWF), the Cabela’s MWC is open to avid walleye anglers from all walks of life.

The Cabela’s MWC’s 2019 schedule has already been announced and features eight qualifiers.