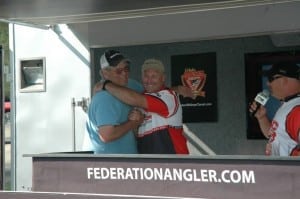 After landing in third place on day one with 12 pounds, 10 ounces, Sabatose, of Brockport, and Mausser, of Sharon, weighed a 7-pound, 6-ounce basket the final day to charge past day one leaders, Ohio’s Jason Kopf and Rodger Riggs. Sabatose and Mausser collected $9,500 in cash for the win, plus the $500 Berkley Baits Award and $500 Lowrance HDS Gen2 Touch and Elite 7 contingency. They also claimed a $1,000 Cabela’s National Team Championship Prize Package including paid NTC entry, travel stipend, team jerseys and plaques.

“It’s an amazing feeling—a dream come true!” said Sabatose, who fished a Cabela’s MWC event at Henderson Harbor, New York, a number of seasons ago and has long hoped the trail would stop at his home waters of Kinzua. “Structure is key on this lake,” he noted. “We trolled Berkley Flicker Shads on leadcore line at speeds of 1.7 to 2.2 mph over rockpiles and stump patches, and caught fish from depths of 16 to 36 feet deep.” 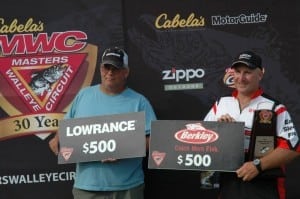 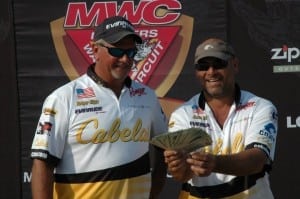 The event marked the Circuit’s first trip to the Keystone hotspot, which drew a groundswell of local participation and support. “A big thank-you is in order for everyone who helped make this event a success, including Zippo Outdoors, Giordano’s Corydon Hotel, the Seneca Nation, University of Pittsburgh at Bradford, and the Bradford High School Criminal Justice Club,” said Tournament Director Dan Palmer. He also thanked local MWCer and Zippo pro-staffer Doug Yohe and teammate Charlie Brandt for welcoming new competitors into the MWC family.