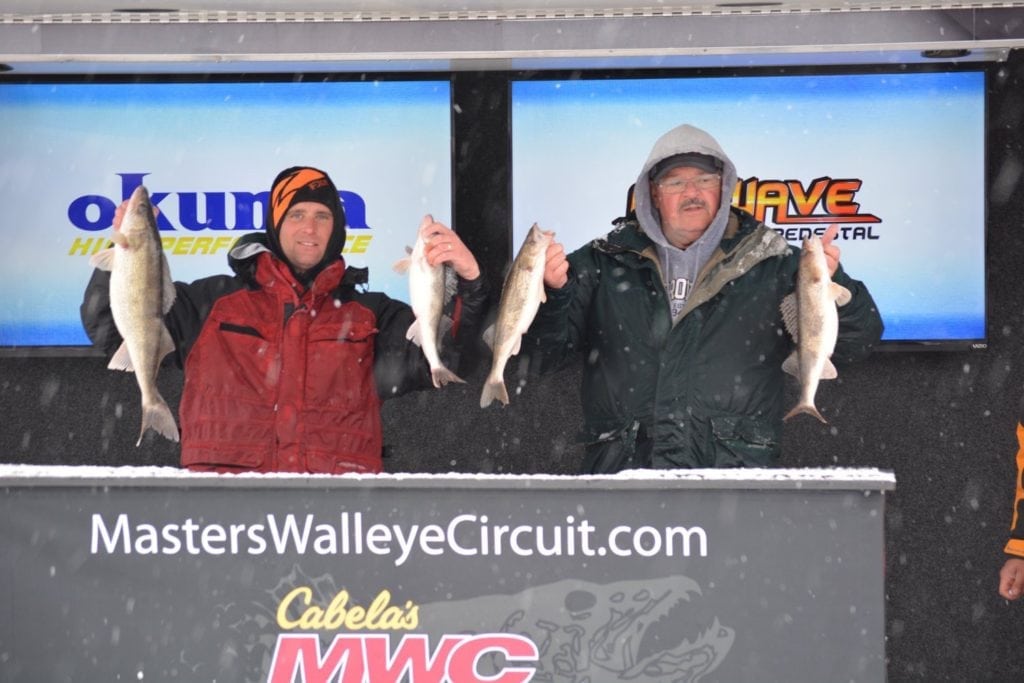 Presented by Lowe Equipment Attachments and headquartered at the Spring Valley Boat Club, the two-day tournament pitted 81 teams from across the Midwest against one another in an epic battle for serious bragging rights and a share of the MWC’s generous payout.

“It was brutal out there today—snowing and cold, with 20- to 30-mile-an-hour winds,” said Lahr of the day two weather conditions. “But the win feels great! I had my face in the wind, running the boat, and Jason came through with the bites we needed.”

One of the most important of those bites came at 2:50 p.m. on the final afternoon of competition. The fish turned out to be a 5-pound, 13-ounce walleye that anchored their day-two basket of 15 pounds, 12 ounces and catapulted them from 16th place to the winners’ circle with a 27-pound, 9-ounce total. “I was shaking after we got the fish in the boat,” said Hancock, who was fishing as a substitute for Lahr’s regular tournament partner, Tommy Skarlis. “I was so excited, it was five minutes before I could get my line back in the water.”

For Lahr, the win marked his second straight MWC victory and third overall. He and Skarlis won the Cabela’s MWC World Walleye Championship last October and a regular season qualifier on the Mississippi River in 2014. “We’ve been blessed,” said Lahr. “And back-to-back wins are really hard to beat.”

Lahr and Hancock’s main tactic was vertically fishing a jig, ringworm and minnow combination, mainly in 12½ to 13½ feet of water in the Peru Flats area. Their MWC 10-fish tournament limit included nine saugers and the one kicker walleye.

The winners collected $13,700 in cash and prizes, including the $11,200 first-place cash payout, plus the $1,000 Ranger Cup bonus, $500 AirWave certificate, and a $1,000 Cabela’s National Team Championship Prize Package including paid entry into the Cabela’s NTC, travel stipend, team jerseys and plaques.

A total of 683 walleyes and saugers weighing 1,370 pounds, 4 ounces crossed the scale at the Spring Valley Boat Club during the event. Adding to the fun, the Cabela’s MWC and National Professional Anglers Association presented a Youth & Family Fishing Clinic immediately after the day-one weigh-in, with participating youths receiving rod-and-reel combos courtesy of the NPAA.