Presented By The Walleye Federation 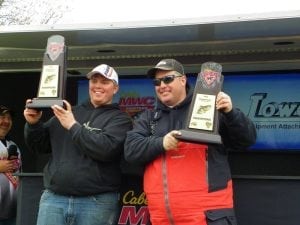 On day one of the two-day team tournament, which featured 120 of the Midwest’s top walleye anglers battling for thousands in cash and prizes, the Ortonville, Minnesota, duo boated a 5-fish limit weighing 18 pounds, 3 ounces to position themselves in second place and within striking distance of leaders Mike Dorris and Brian Tordsen, who boated 19 pounds, 2 ounces.

The Arndts added another five fish weighing 11 pounds, 9 ounces to their tally on day two for a 29-pound, 12-ounce total weight.

“It’s pretty exciting,” said MWC veteran Artie Arndt after the dust settled on day two. “I’ve been fishing tournaments for 22 years and it’s always been a dream to win a major event like an MWC. To win it with my son is extra special.”

“It was a blast,” added Tanner Arndt, who was competing in his first MWC tournament. “It brought back a lot of good memories of fishing with my dad.”

Based in Ortonville, the event offered two-person teams two full days of competition on the historic border waterway separating Minnesota and South Dakota. Many MWC tournaments have played out on the reservoir over the years, with more than a few exciting finishes—and this was no exception.

The Arndts started the tournament trolling shad-style crankbaits in 11 feet of water, and put a 6-pound, 13-ounce beauty in the livewell. But when the trolling bite fizzled, they quickly switched to soaking leeches on jigs below slip bobbers in 4½ feet of water near Big Stone’s storied islands area.

“Walleyes were periodically moving up onto the rocks to feed, so we decided to anchor up and wait them out,” Artie explains.

As fate would have it, the rest of their keepers came on that program. “Day two was a slow day,” Tanner added. “But we put all of our marbles in one jar and stuck with that particular spot.”

Their persistence paid off with more than $13,500 in winnings, including the $9,300 first-place cash award plus $2,975 from the option pot, $200 Okuma Inspira reel bonus and $230 from the MWC Big Fish Pot. They also claimed a $1,000 Cabela’s National Team Championship Prize Package including paid entry into the 2017 NTC, travel stipend, team jerseys and plaques.

Because all 2016 Cabela’s MWC tournaments are designated as “State Championship Qualifying Events,” the Arndts also earned the title of South Dakota State Walleye Champions. Besides bragging rights, they claimed custom state champions’ prizes and awards, a berth in the Cabela’s 2017 NTC, and 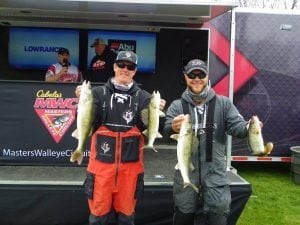 a spot on the MWC website’s Wall of Fame. 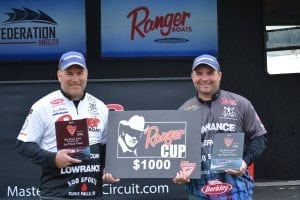 A total of 184 walleyes weighing 510 pounds, 6 ounces crossed the scale at scenic Lakeside Park during the catch-and-release event. Adding to the fun, the Cabela’s MWC, National Professional Anglers Association and Pure Fishing presented a Youth & Family Fishing Clinic immediately after the day-one weigh-in, with participating youths receiving rod-and-reel combos courtesy of the NPAA.

Under the umbrella of The Walleye Federation (TWF), the Cabela’s MWC is open to avid walleye anglers from all walks of life. The 2016 schedule includes seven qualifiers in six states on a diverse selection of the Walleye Belt’s finest rivers, inland lakes and big-water fisheries. Up next is the Lake Erie qualifier out of Lorain, Ohio, June 3-4.