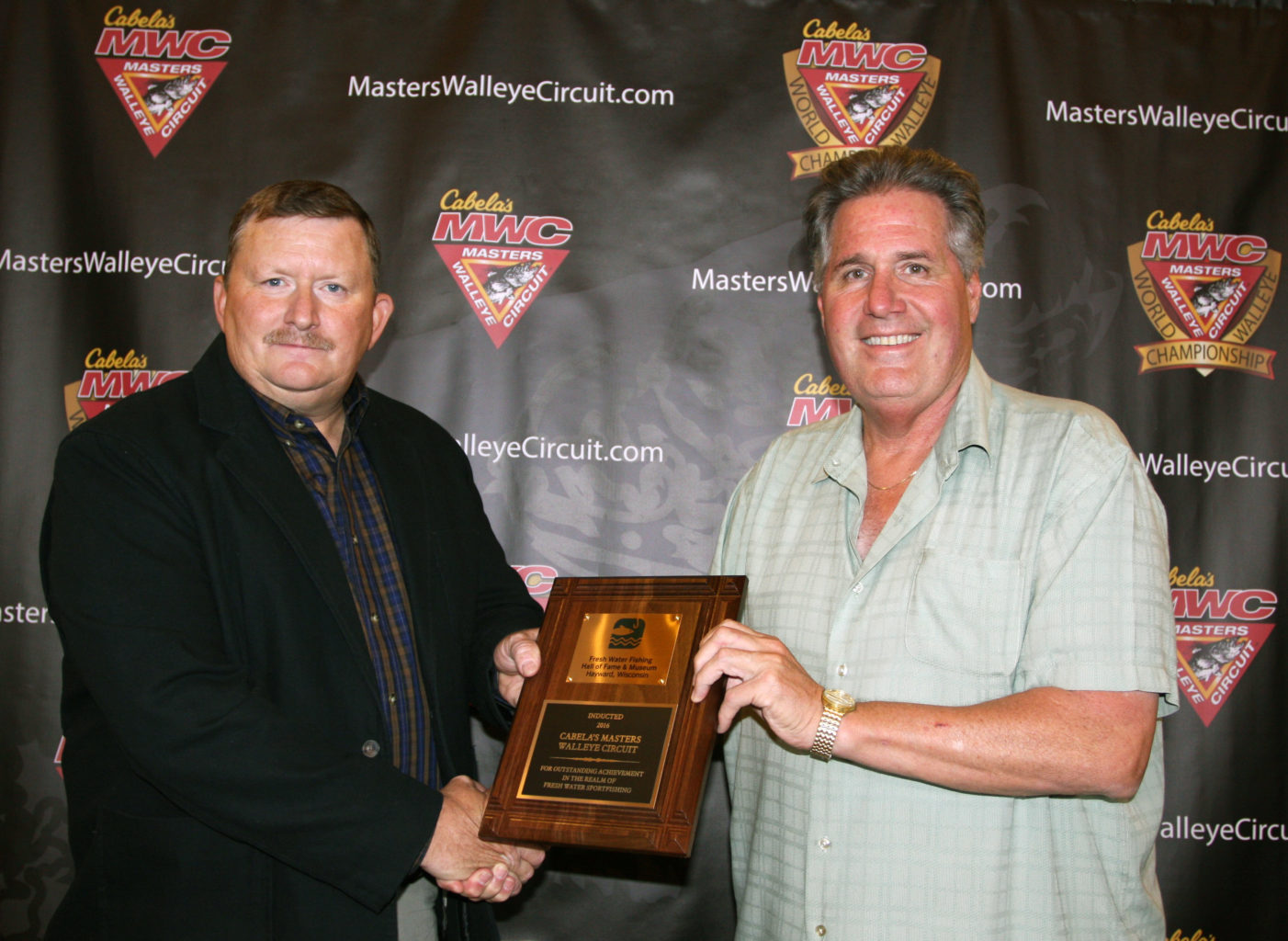 Oct. 5, 2016—Green Bay, Wisc.—In an emotional ceremony that reflected on the past while also looking forward to a bright future, the Cabela’s Masters Walleye Circuit was inducted into the National Fresh Water Fishing Hall of Fame last night at the Green Bay Cabela’s.

Hall of Fame executive director Emmett Brown (at right above) presented the award to MWC president and CEO Robert Cartlidge (at left).

“Since 1984 the Cabela’s MWC has really set the standard for team walleye fishing, but they’re so much more than that,” said Brown, acknowledging the circuit’s conservation and youth efforts. “It’s with great personal pride I officially bring the Cabela’s Masters Walleye Circuit into the Hall of Fame.”

Cartlidge gratefully accepted the honor, but credited the circuit’s anglers, sponsors, staff and other supporters for helping it survive the test of time for 33 years. “Really this award belongs to all of you,” he said.

“In 1985, a fledgling little group called MWC came to Flippin, Arkansas, looking for a sponsor, and that marriage and friendship has been going on ever since,” said Lindahl. “We appreciate the vast support the MWC and its anglers have given us.”

“We extend our congratulations to the MWC. Their 30-plus years of promoting fishing, conservation and education are obvious reasons why we want to sponsor the circuit,” Hanley said.

“Cabela’s has been a part of the Masters Walleye Circuit for 15 years. It’s been a great pleasure and we look forward to many, many more,” said Lara Herboldsheimer of Cabela’s brand partnerships.

“Cabela’s is proud to partner with such a great organization,” added Jeremy Wonch, also of the company’s brand partnerships division. “Your efforts toward conservation, youth involvement and growing the sport of fishing have been outstanding.”

The National Fresh Water Fishing Hall of Fame, located in Hayward, Wis., is the international headquarters for education, recognition and promotion of freshwater sportfishing. Each year it recognizes individuals, groups and organizations for their impact benefiting freshwater angling. Individuals and organizations are honored for outstanding achievements in fishing accomplishments regarding career success and innovation in competition, invention, science, education, conservation, communications, technology or other areas related to fishing.

Under the umbrella of The Walleye Federation (TWF), the Cabela’s MWC is open to avid walleye anglers from all walks of life, with registration for all qualifying events opening in January of 2016.