New Town, ND — July 13, 2020 — After a long absence from Lake Sakakawea, the Bass Pro Shops and Cabela’s Masters Walleye Circuit (MWC) presented by Ranger Boats, teamed up with 4 Bears Casino to reignite the circuit’s relationship with the historic lake. While the views all around the reservoir are incredible, the results of the two-day tournament for Dan Stier (Mina, SD) and Dennis Bense (Bismark, ND) were equally impressive.

Each of the two mornings at take-off, as their boat rolled past the MWC staff, tournament announcer, Jeff Kelm called out the team’s boat number and their names, and each morning Dan Stier would echo back “The Dream Team”. Dan elaborated on that nickname on stage after weighing over 29lbs of fish on the second day of competition. “Dennis and I have a pretty unique thing going, each time we team up and fish a tournament together, we usually end up winning it.” When asked how they caught a total of 55-08 on Friday and Saturday, Stier said the team did what they knew what to do best, fishing creek chubs in deep water.

Of course, no great story comes without a little adversity. After securing the win, Dennis shared a story with the crowd about losing a potentially tournament winning fish out of the net at the back of the boat. “I am really relieved, I let one get out of the net today that would have been about a two-pound upgrade and I would have never have heard the end of it we didn’t win.” Fortunately for both Dennis and Dan, the two pounds were not a necessity after besting second place by over 10 pounds. 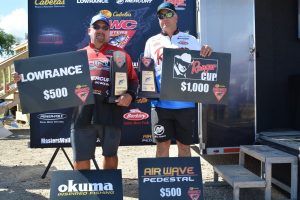 All together the Bass Pro Shops and Cabela’s Masters Walleye Circuit awarded $34,506.50 in cash and prizes at 4 Bears Casino and Lodge in New Town, ND. 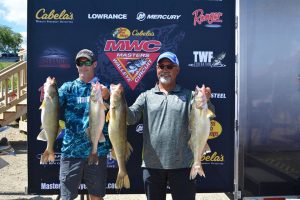