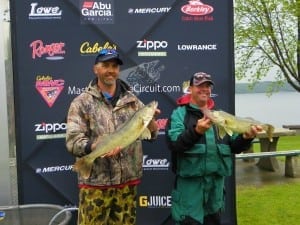 After landing in 11th place on day one with an 11-pound, 11-ounce 5-fish limit, the pair vaulted into the winner’s circle on the wings of a 20-pound, 15-ounce basket that gave them a 32-pound, 10-ounce total weight. The win earned them $9,300 in cash along with the $1,000 Ranger Cup contingency and $200 Okuma bonus. They also collected $2,800 in cash from the option pot, and a $1,000 Cabela’s National Team Championship Prize Package, including paid entry into the 2016 NTC, travel stipend, team jerseys and plaques.

Because all 2015 Cabela’s MWC tournaments are also designated as “State Championship Qualifying Events,” Sunne and Hartman, both of Milbank, also earned the 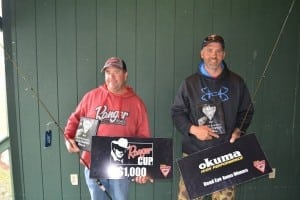 title of South Dakota State Walleye Champions. Besides bragging rights, they claimed a $1,000 prize package including custom champions’ rings from Tight Lines Jewelry, marble plaques, decals and a spot on the MWC website’s Wall of Fame.

“We’re pretty excited,” said Sunne. “This is our fifth time fishing the MWC’s Big Stone tournament and we’ve taken a couple thirds and a seventh, but never a win.” Hartman, who was likewise elated at the victory, explained the team pitched jigs tipped with minnows to shallow rock piles about six miles from the Ortonville landing in 3 to 5 feet of water. They also pulled slip bobbers and leeches behind the boat, but jigging proved the most productive tactic.

In second place, Troy Morris and Corey Heiser brought in nine fish weighing 28 pounds, 15 ounces to collect $4,650 in cash, plus $2,100 from the option pot and the $500 Lowrance Electronics bonus. 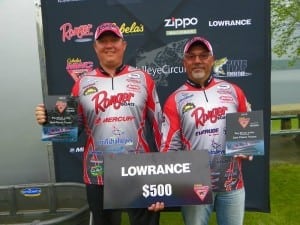 Big-fish honors went to Kelly Stattelman and Monty Athey in 14th place for their 10-pound, 2-ounce walleye, which earned them the $200 Zippo Hot Hand Award. They also claimed $700 for taking fourth place in the option pot standings.