Trenton, Mich.—April 14, 2013—After taking the lead on the first day of competition with a record-breaking 49-pound, 10-ounce basket, Iowans Marty Stuefen and Carl Holten hung on to win the Cabela’s Masters Walleye Circuit’s Detroit River and western Lake Erie tournament at Trenton, Michigan. 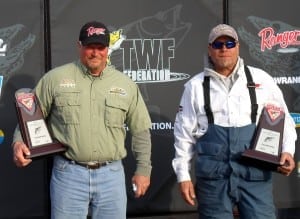 “It’s an awesome feeling,” said Holten, of Harpers Ferry. “We were in first place on Day One and managed to bring it home.” The team’s monstrous first-day catch made MWC history, eclipsing the Circuit’s all-time single-day basket record of 48.95 pounds, set by Jason Kopf, of Avon Lake, Ohio, and Mike Miller, of Brunswick, Ohio. On Day Two of the two-day, team-format event they brought in 36 pounds, 8 ounces for a total weight of 86 pounds, 2 ounces.

“It doesn’t get any better than this,” added Stuefen, also of Harpers Ferry. He explained that their go-to tactic was fishing 3/8-ounce jigs tipped with Berkley PowerBait Twitchtail Minnows in six- to 12-foot depths in the Detroit River. He said that as water clarity worsened during the event, finding the cleanest conditions possible was also key. 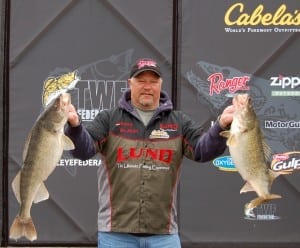 Holten noted that adding a shiner minnow to the jig atop the PowerBait bulked up the presentation. “We used 10- and 14-pound-test Berkley FireLine mainline, and a two-foot leader of Berkley Vanish fluorocarbon,” he added. “Slow jigging was also critical. We lifted the jig about eight inches off bottom, and then slowly dropped it.”

Canadians Shane Turcotte, of Goulais River, Ontario, and Ivan Misevic, of Longford, Ontario, finished a close second with 84 pounds, 9 ounces, worth $6,700. In all, the top 20 percent of the field shared more than $62,000 in cash, plus sponsor bonuses and Big Fish Pot winnings.

Despite foul weather and water temperatures hovering in the 40s, a total of 1,011 walleyes crossed the stage and were quickly returned to the river in the catch-and-release format. The 122 teams racked up 187 five-fish MWC limits during the two days, including numerous trophy walleyes. “The fishing was incredible,” said MWC Tournament Director Dan Palmer. “This is the best big-fish river in the country.”

Two Michigan teams shared the honor of catching the biggest fish of the tournament. Dave Adamczyk, of Grosse Ile, and Mark Barry, of Frasier, weighed in a 12-pound, 1-ounce behemoth, as did Jeffrey Snellgrose, Jr., of New Lathrop, and teammate Chris Berent, of Saginaw. The teams each earned $1,125 from the MWC Big Fish Pot for their catches.