Skarlis and Lahr putting on a clinic at Hastings, MN lead by more than 11 pounds! 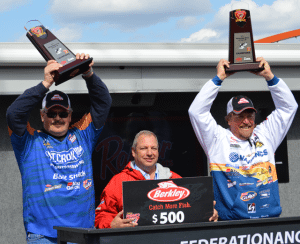 “It’s totally awesome,” said Lahr, of Dubuque. “We’ve been close a couple of times, so this is really fulfilling.” He and Skarlis collected the $6,600 first-place cash payout, plus $500 in Berkley Artificial-Only Bonus Cash, $1,000 in Ranger Cup winnings, the $500 Berkley Baits contingency, $510 from the big-fish pot, and the $200 Optima True Blue award. They also claimed a $1,000 Cabela’s National Team Championship Prize Package including paid NTC entry, travel stipend, team jerseys and plaques. And as an added bonus, co-presenting sponsor Lowe Equipment Attachments presented them with a $200 Cabela’s gift card. 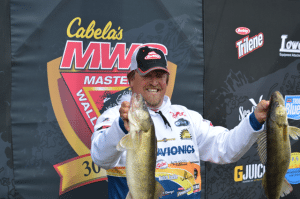 Held May 2-3 out of the Hastings Public Launch at Jaycees’ Park, the event offered two-person teams the chance to battle for thousands of dollars in cash and prizes in a professionally run setting. And in an exciting twist on traditional walleye tournament formats, the event was “artificial-only”—with extra winnings at stake as anglers fished their favorite crankbaits, spinners, Berkley Gulp!-type softbaits and other man-made presentations, while live bait such as minnows and nightcrawlers were off limits. The concept emerged thanks to a partnership between Berkley Gulp! and the Cabela’s MWC, with Berkley kicking in an additional $2,500 in prize money for the top eight teams.

The artificial-only format was no handicap to Skarlis and Lahr, who bought four fish weighing 23 pounds, 4 ounces to the scale on day one. It was the heaviest catch of the day and landed them solidly atop the leaderboard. On day two, they followed up with two fish weighing 12 pounds, 4 ounces for the 35-pound, 8-ounce total weight.

Skarlis explained they were fishing a pair of steep breaks in the Wisconsin Channel that dropped from 16 to 22 feet of water. Three-way rigs and stickbaits sweetened with Gulp! Alive! Attractant spray produced a number of their fish. “One of the neat things was, the homemade, teardrop-shaped, do-it-yourself jigs Jeff and I poured last winter while we were dreaming of fishing the MWC’s 30th season caught some of our biggest walleyes,” Skarlis noted. Tippings included Berkley Gulp! Minnows and PowerBait Rib Worms fished solo, but the big-fish ticket was a 3-inch Gulp! Minnow piggybacked on a PowerBait Twitchtail Minnow.

Skarlis also credited the team’s Optima Batteries for powering their bow-mount trolling motor throughout day-long battles with the swollen Mississippi. “The fish were pressured and finicky, so we relied on the stealth of our electric,” he said. “The Optimas held up all day, and I’m sure could have kept going for hours.”

After a slow start on day one with a single fish weighing 3 pounds, 15 ounces, the father-son team of Mike Schommer Sr., of Prescott, Wisconsin, and Mike Schommer Jr., of Woodbury, Minnesota, finished strong with a five-fish limit weighing 26 pounds, 5 ounces to claim second place, worth $3,750 in cash, along with the $500 Lowrance HDS Gen2 Touch and Elite 7 contingency. The Schommers also pocketed $320 from the MWC Big Fish Pot and the $250 Zippo Hot Hands Big Fish Award for catching big fish of the tournament, a 7-pound, 15-ounce walleye. 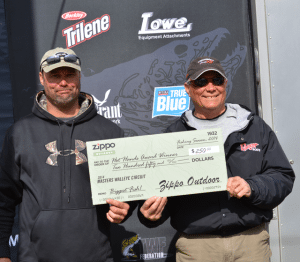 Rounding out the top 5 teams were Jim Preissner, Chilpon, WI and Mike Olsen, Andover, WI in third with 23-15, Zach Horton, Pine Island, MN and Ben Baune, Rochester, MN in fourth with 20-15 and in fifth the team of Don Olsen, Oak grove, MN and Randy Carroll, Oswego,Il. with 19-07.