Trenton, Mich.—April 19, 2014—Wisconsin’s Tony Kobriger and Dan Zwick charged from a three-way tie for 28th place on Day One all the way to the winner’s circle at the Cabela’s Masters Walleye Circuit’s Detroit River and Western Lake Erie tournament April 18-19.

“It’s an unbelievable feeling,” said Zwick, of Wrightstown, adding that the chance to catch trophy-class walleyes made the experience even sweeter. “These are the biggest walleyes I’ve ever caught jigging,” he said. “There’s nothing like getting bit by fish so huge they don’t even budge when you set the hook.” 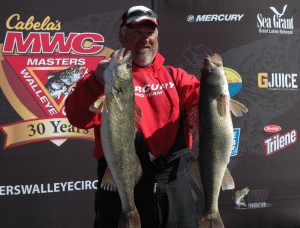 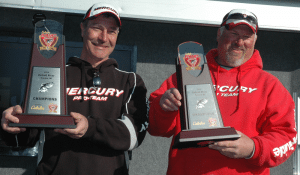 “This is awesome,” added Kobriger, of Chilton. He explained that they focused on the Detroit River, where their go-to tactic was fishing ½-ounce jigs tipped with 3-inch Berkley Gulp! Alive! Ripple Shads on both sides of a rocky point in 14 to 17 feet of water.

After bringing a five-walleye limit weighing 39 pounds, 1 ounce to the Cabela’s MWC stage at scenic Elizabeth Park in Trenton on Day One, they added a 48-pound, 2-ounce limit on Day Two for an 87-pound, 3-ounce total that not only won the event, it shattered the Circuit’s longstanding two-day basket record of 86.38 pounds. It also marked Kobriger and Zwick’s fourth MWC Circuit victory. They won the Green Bay qualifier out of Oconto in 2013, the Cabela’s MWC World Walleye Championship on the Mississippi River at Prairie du Chien, Wisconsin, in 2011 and the Cabela’s MWC World Walleye Championship a second time in 2013 at Escanaba, MI.

For their latest win, the team collected the $14,400 first-place cash payout, plus the $1,000 Ranger Cup contingency, $500 Berkley Baits bonus, $500 Lowrance HDS Gen2 Touch and Elite 7 contingency, and a $1,000 Cabela’s National Team Championship Prize Package including paid NTC entry, travel stipend, team jerseys and plaques. In second place, the Gibraltar, Michigan, team of Charlie and Nicholas Borg pocketed $6,600 for their 86-pound, 2-ounce total. Grosse Ile, Michigan’s Michael and Gary Rahn claimed the $200 Optima True Blue award in third place. In all, the top 20 percent of the field shared $68,560 in cash and prizes, with last place in the money receiving $1,000 as will be the case for the final place in the money for all 2014 MWC events.

The Detroit River and western Lake Erie produced 1,050 fish weighing a total of 6,970 pounds, 6 ounces during the catch-and-release event. Big fish was a 13-pound, 4-ounce behemoth caught by Jerry Fox, Jr. and Kenneth Fox, both of Algonac, Michigan. 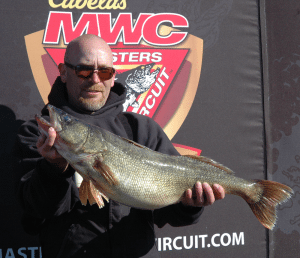 Besides earning them the $250 Zippo Hot Hands Big Fish Award and $1,375 from the Big Fish Pot, the giant fish tied the Circuit’s all-time walleye record held by the father-and-son team of John and John Murphy of Imlay, Michigan.