Oconto, Wisc.—August 4, 2018— A day-two midday flurry propelled Wisconsin’s Ryan Dempsey and Jake Kaprelian to the top of the leaderboard in a big-fish shootout at the Cabela’s Masters Walleye Circuit tournament on Green Bay of Lake Michigan out of Oconto, Wisconsin, August 3-4, 2018.

“It feels really good to with this,” said Dempsey, of Green Bay. “We struggled until 11:30 today, then the bite turned on when we made one last pass before making a move to try for smaller fish just to cash a check. We were done by 1 o’clock.” 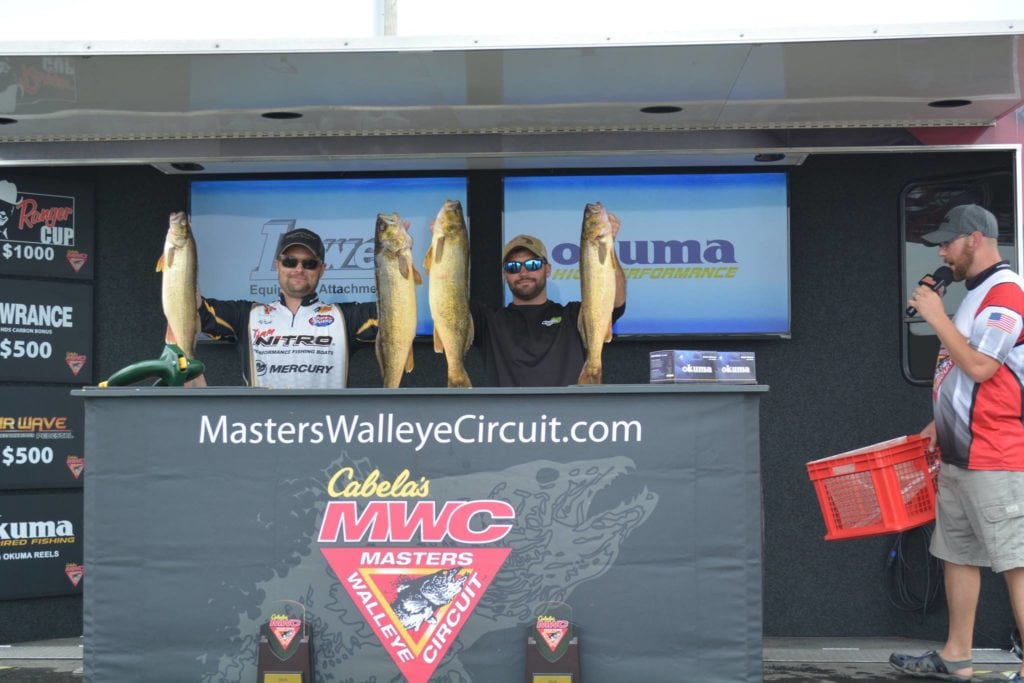 “It was a grind both days,” added Kaprelian, of New Berlin. “We were fishing a lukewarm bite a long run from the launch, gambling we’d get the right bites from big fish and be able to capitalize on them. Thankfully, the rewards were worth it.”

Dempsey and Kaprelian brought in a 5-fish MWC limit weighing 32 pounds, 9 ounces on day one. The weight put them solidly in fourth place. They added a 38-pound, 14-ounce limit on day two for a 71-pound, 7-ounce tournament total. They reported trolling spinner rigs and crawlers on day one, and catching most of their day-two fish on banana-style crankbaits. Shallow structure rising out of deep water was key both days.

Dempsey and Kaprelian collected $16,822 in cash and prizes for their efforts, including the $11,500 first-place cash payout, $3,822 cash from the option pot, $500 Lowrance Electronics bonus, $500 AirWave certificate, and a $1,000 Cabela’s National Team Championship Prize Package including paid entry into the Cabela’s NTC, travel stipend, team jerseys and plaques.

A total of 692 walleyes weighing 3,146 pounds, 2 ounces crossed the scale during the tournament. Big fish was an 11-pound, 6-ounce trophy caught by Jason Merkley and Dustin Kjelden. Adding to the fun, the Cabela’s MWC and National Professional Anglers Association presented a Youth & Family Fishing Clinic immediately after the day-one weigh-in, with participating youths receiving rod-and-reel combos courtesy of the NPAA.