“It feels really good to win, there’s definitely some pride involved,” said Adler, of Oconto Falls. Indeed, the victory was sweet redemption after he and Dempsey, of Oneida, took second at the Cabela’s National Team Championship on Green Bay in late May after leading the event the first two days. In fact, it was a role-reversal at the Cabela’s MWC Green Bay qualifier. Dempsey and Adler left the dock on day two in second place, then climbed to first when day one leaders Randy Gaines and Mike Rhoades brought just one fish to the scale the final day. 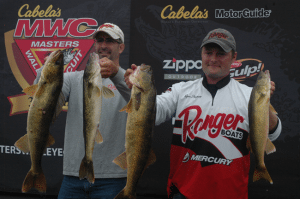 “There was a lot less pressure going out in second place this morning,” Dempsey grinned after scoring the win. He explained that he and Adler cast jigs, bladebaits and lipless rattlebaits in depths of 4 to 23 feet of water, experimenting with a variety of cadences from snap-jigging to dragging. A ¾-ounce leadhead tipped with a 4½-inch, paddle-tailed Berkley PowerBait was a top producer. 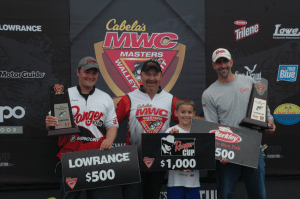 In second place, Michigan’s Wayne Van Dyke, of Spruce, and Erich Carlson, of Presque Isle, weighed in seven fish for 47 pounds, 12 ounces, worth $5,300 in cash. 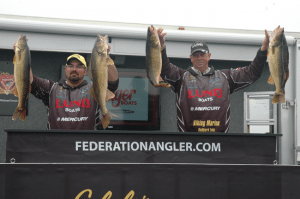 Rounding out the top 10 were:

In other contingency winnings, Chad Burns and Nick Wenninger won the Rockstar Comeback Award for jumping from 44th on day one to 17th place, worth a $500 Rockstar Mud Flap Package. In all, the Cabela’s MWC awarded $47,000 in cash and prizes.