Huron, Ohio—Sept. 27, 2014—Ohioans Mark Brumbaugh and Michael Robertson stormed the leaderboard on day two of the Cabela’s Masters Walleye Circuit’s Lake Erie qualifier to score a dramatic comeback victory worth more than $10,000 in cash and prizes. 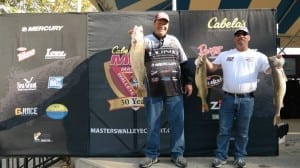 “This is my first major tournament win, and it’s really exciting,” Robertson, of Laura, said seconds after topping the field of 55 teams from 14 states and one Canadian province. Held Sept. 26-27 out of Huron, Ohio, the event was the final qualifier of the 2014 Cabela’s MWC season.

After weighing in 17 pounds, 9 ounces on day one, Brumbaugh and Robertson found themselves in seventh place, trailing leaders Wayne Van Dyke and Bruce Mueller by more than 9 pounds. But on day two, an impressive 32-pound, 7-ounce limit that proved to be the heaviest basket of the tournament pushed Brumbaugh and Robertson over the top with a 10-fish limit weighing 50 pounds even.

“We just went out on day two and worked hard, changing lure colors and following the fish,” Robertson added. He credited their Lowrance HDS 12 electronics for helping them track a school of wandering walleyes that changed locations from day one to day two.

“I haven’t won a big event in awhile, so it’s nice to know I can still do it,” grinned Brumbaugh, of Arcanum. He explained the team long-lined crankbaits 28 to 30 feet down in 38 to 40 feet of water about 5 miles from port, along the northwest corner of a sediment dump. Speeds of 2 to 2.2 mph were key, as was their 10-pound-test Berkley Trilene Big Game monofilament, which they ran with letbacks of 120 to 200 feet behind their planer boards.

“We also added small pieces of 3-inch Berkley Gulp! Fry to the crankbait trebles for extra scent,” he noted. “The thin-diameter Fry is perfect because it doesn’t affect the lure’s action.” 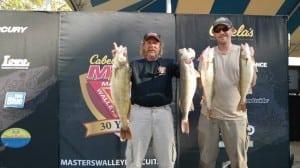 Joe Miller of Elgin, Illinois, and Steve Tyszko of Miller’s Port, Ohio, finished second with 45 pounds, 10 ounces, worth $4,300 plus $638 from the Big Fish Pot and the $250 Zippo Hot Hands Big Fish Award for catching big walleye of the tournament, a 10-pound, 13-ounce behemoth. 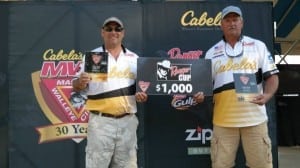 Under the umbrella of The Walleye Federation (TWF), the Cabela’s MWC is open to avid walleye anglers from all walks of life. The 2014 trail included 10 qualifiers spread across seven states. Teams showcased their skills—and sponsor products—at world-class venues such as the Illinois, Detroit and Mississippi rivers, Green Bay, Big Stone Lake, Kinzua Reservoir, Cass Lake and Lake Erie. The Cabela’s Masters Walleye Circuit’s 2014 World Walleye Championship is set for Oct. 9-11 on the High Plains paradise of Devils Lake, North Dakota.