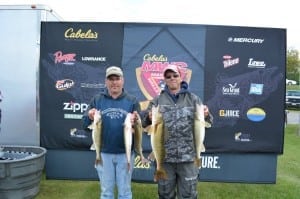 “It’s really exciting,” Swenson, of Deer River, said of the win seconds after topping the 80-team field in front of a roaring crowd gathered at Stony Point Resort. “This was a great day,” beamed Braaten, of Blackduck. The event was Swenson’s second Circuit competition, and Braaten’s first. “It’s a good way to start out on the MWC,” he added.

After landing in fourth place on day one with a five-fish limit weighing 15 pounds, 9 ounces, Braaten and Swenson stormed the leaderboard with an identical day two weight for a 31-pound, 2-ounce total.

They relied on rigging creek chubs and redtails in 20 to 30 feet of water on Cass Lake and Pike Bay for many of their fish, and credited their Lowrance HDS sonar for revealing bottom-hugging walleyes, especially along steep breaks. “We also cast jigs tipped with 4-inch Berkley Gulp! Smelt in depths of 15 feet,” Swenson added. 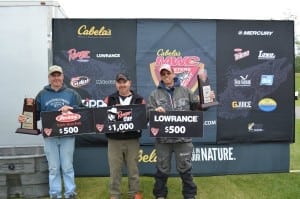 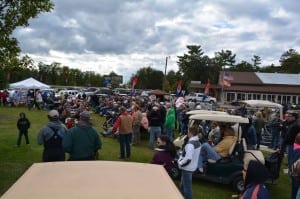 In other contingencies, Peters and Lewis won the $200 Optima True Blue bonus; Mike Dorris and Brian Tordsen claimed the $250 Zippo Hot Hands Big Fish Award for catching big fish of the tournament, an 8-pound, 2-ounce walleye; and Ryan and Jerry Lagodinski won the $500 Rockstar Hitch Mounted Mud Flaps award for climbing from last place on day one to 38th on day two. In all, the Cabela’s MWC awarded $47,600 in cash and prizes. 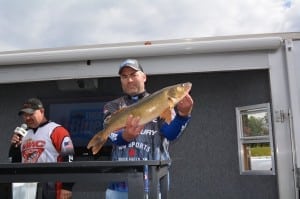 Under the umbrella of The Walleye Federation (TWF), the Cabela’s MWC is open to avid walleye anglers from all walks of life. The 2014 trail included 10 stops spread across seven states in the Walleye Belt. Teams showcased their skills—and sponsor products—at world-class venues such as the Illinois, Detroit and Mississippi rivers, Green Bay, Big Stone Lake, Kinzua Reservoir, Cass Lake, and finish the regular season at Lake Erie Sept. 26-28.