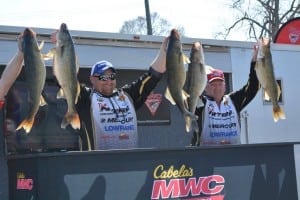 The Bodingers, both of Chilton, Wisconsin, brought in 47 pounds, 8 ounces on day one and 43 pounds, 3 ounces on day two for their epic total, which broke the circuit’s all-time two-day basket record of 87 pounds, 3 ounces, and pushed them to the top of the 70-boat leaderboard, just one ounce ahead of second-place finishers Curtis Olivier and Doug Galant, who weighed in 90 pounds, 10 ounces. 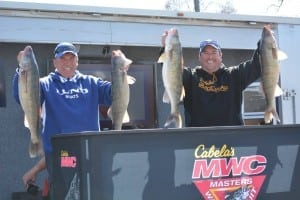 “It’s an awesome feeling,” Steve said of the brothers’ second MWC Detroit River victory in a stellar 20-plus-year circuit career, having won the event in 2010 with 10 fish weighing just over 72½ pounds. The Bodingers collected the $10,000 first-place cash payout, plus $3,900 in cash from the option pot, a $1,000 Cabela’s National Team Championship Prize Package, including paid entry into the 2016 NTC, travel stipend, team jerseys and plaques. They also won two Okuma Dead Eye rods worth $200.

“This is unbelievable,” Dan added, noting that having friends and family at the event made it doubly rewarding. He explained that their winning tactics hinged on fishing ¾- to 1-ounce jigs tipped with 3- to 4-inch, shad-tailed Berkley PowerBait. “Green was our hot color,” he said. “I snap-jigged while Dan fished more slowly on bottom, and both approaches caught fish.”

The Bodingers also credited their Lowrance HDS-10 electronics for revealing their go-to fishing spot, a rocky straight-away lying in 22 to 25 feet of water on the Canadian side about a mile from Lake Erie. “We didn’t catch 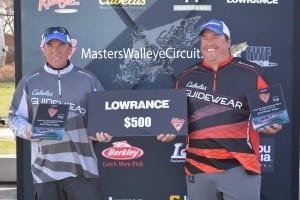 a lot of fish, but we saw them on our Lowrance sonar so we kept working the area and it paid off,” he explained.

In second, Olivier, of Yankton, South Dakota, and Galant, of Pleasant Hills, Missouri, claimed $5,000 in cash, plus $2,900 from the option pot and the $500 Lowrance Electronics contingency. 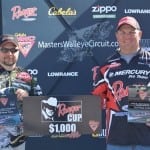 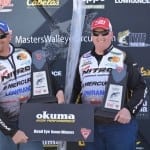 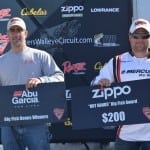 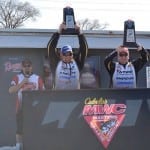 All 2015 Cabela’s MWC tournaments are designated as “State Championship Qualifying Events.” In states hosting two events, teams must fish both tournaments to be in the running. The Bodingers now lead the points race for the Michigan title, which will be decided at the Escanaba event in July. Besides bragging rights, state champions claim a $1,000 prize package including custom marble plaques, decals, a spot on the MWC website’s Wall of Fame and a bid to the Cabela’s NTC. 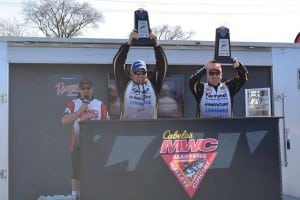